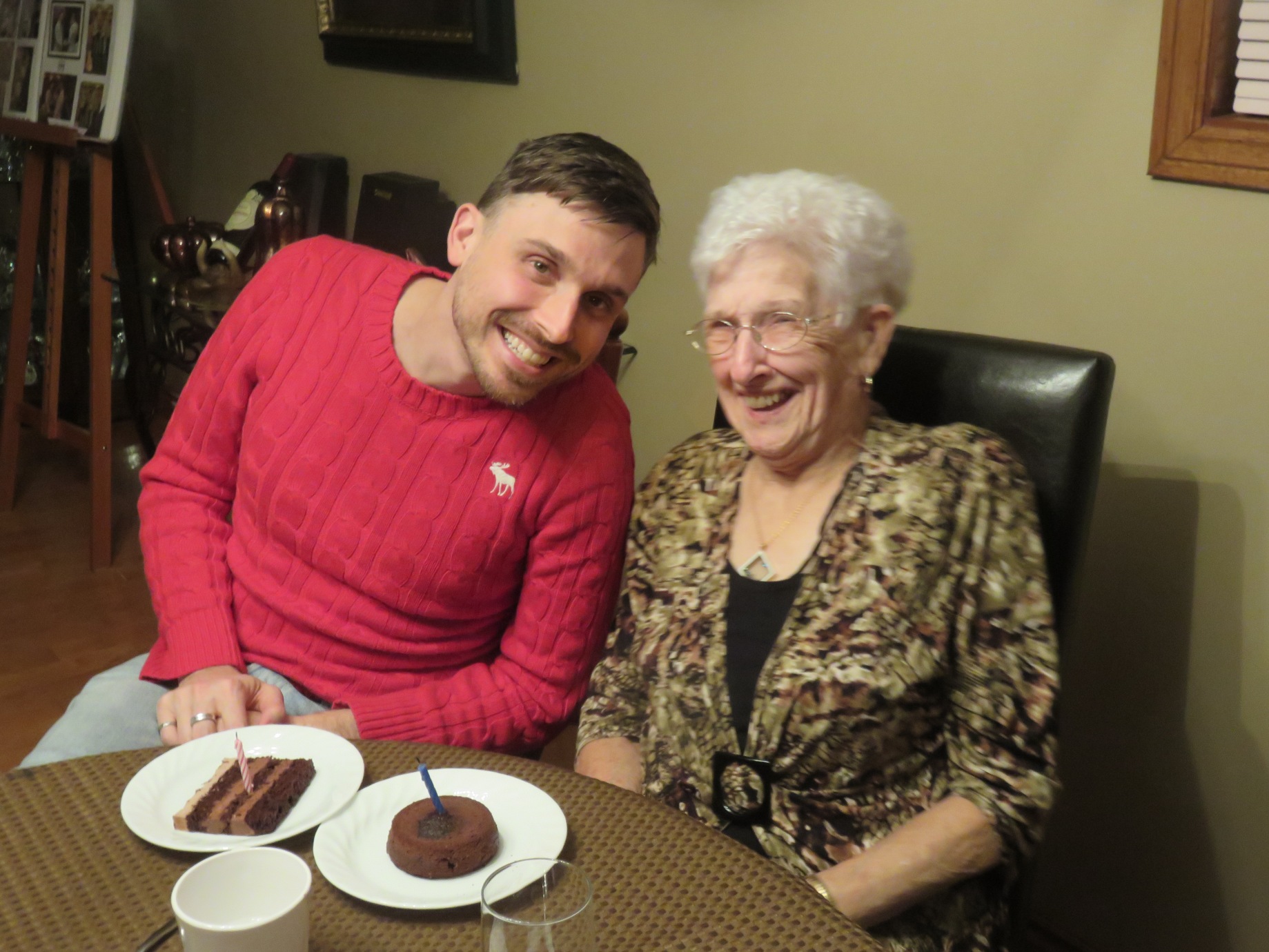 A phone call coming in at 5:35am is never a good sign.  Instantly aware, I grab the phone and pass it to Derrick.  Even though I was deep asleep, an acute alertness comes over me.   My gut knows, but my brain tries to deny it.  Derrick says hello, and instantly crumbles.  The world freezes.  His energy changes beside me.  He drains.   His dear wonderful Grandma Tisi has passed suddenly.

Grandma Tisi was a woman who didn’t let anything slow her down.  She loved her family, her community, and her every day.   I met her 7 years ago and she always showed me love and humour, while offering a tray of freshly baked donuts.  We had a little joke between us where every time we would meet, I would say in very basic francais “Bonne Annee Grand Nez!” (Happy New Year Big Nose!) and she would just laugh.   Her humour and outlook on life are inspirations for me.  I will miss her friendship, and I will miss seeing how much she lived.   Derrick had the honour of writing his grandma’s eulogy.   I’ve included it below as I think his words best describe what impact this wonderful woman had on the world.

We had to grapple with our feelings while figuring out logistics- how to cancel our planned weekend, and how get home to Canada.  A great distraction.  In our minds, going back to Canada would be a homecoming of happiness, not a sudden trip like this.   When we moved to Philly, we assumed that something like this would eventually happen (despite our belief that everyone we know will live to at least 103).  We just didn’t think it would happen this quickly.  Situations like this make those miles between here and there seem endless.   I am thankful that the road is only 7 hours long, and that his family are exceptional human beings.

Being the partner of someone who loses another person is a distinctive experience.  I chose to put my feelings aside and focus on supporting my partner and his family.  Sometimes that felt easier.   I needed, and wanted to be a rock for him, and in turn have built a little wall around my heart.  Seeing Derrick’s vulnerability as he processes this loss is something I am fortunate to share with him.  I’m thankful he doesn’t hide this.  The hurt is deep.  I also have discovered that I can’t fix what is going on with Derrick even though I’m his partner.  Maybe the best thing I can do is help him find the support that will.   Derrick and I should be enough for each other, but sometimes maybe we aren’t.

How can we really process death?  The little things we hold on to.   Voicemails.  Emails.  Old cards.  Clocks and thimbles.  Homemade desserts hidden in the back of the freezer.   We try to make meaning and peace with death- she didn’t suffer, she went in her sleep.  We will keep her in our hearts.  But the reality is that there is a deep void that can never be replaced.

Inevitably I think about my Grandmas.  Grandma Plumton is nearing 80 (Happy Early Birthday Grandma!) and Grandma Fife is in early 90s.   I need to make sure that I see them both when I’m home, and tell them how much I love them.   I miss them.

I think about my family, and my friends back in Canada.  I need to connect more often.  We chose to move to Philly, and start over.  Was this the right decision?  Is this selfish of us?  Should we move home?   Where is home anymore?  Perspective on life after death seems to become incredibly clear- cherish those you love, do what makes you happy, don’t sweat the small stuff, and enjoy every single minute.    Then as time goes on, we tend to let the busyness of the day to day distract us from that clarity.  We are lost again.

Grandma Tisi’s death left us feeling sad and in pain.  It’s also left us stronger and more connected than ever.  We feel more lost, and more found all at once.  We need to give space to feel what we are feeling, but to live the adventure.   Let’s take it one day at a time, and appreciate life one day at a time.  There are bumps, but find what is worth singing about.  That’s what Grand Nez would do.

What memories do you have that stand out for you of your grandparents?   Remember- If you are suffering from grief, find someone to talk to that helps you- a friend, a counsellor.  Be strong and seek help.  Take care of your mental health.  And finally, make sure the people who you love and who impact you know that- let them know.  Don’t wait until something happens to share the sentiments.   Tell someone today how much they mean to you.

Song of the Day: No Time At All (from Pippin, and Grand Nez)

Dear Family and Friends,
Yesterday my family and I said our final goodbyes to my deeply loved and precious grandmother, Gilberte Tisi.  I’ve struggled tremendously with her passing; but I had the distinct privilege to eulogize her. Here is my eulogy to my grand-maman.

Grand-maman Tisi
Bonjour – Merci à vous tous pour être ici pour célébrer la vie de notre chère grand-maman. C’est évident qu’elle fut bien aimée. Je crois que je partage tous votre surprise, et votre tristesse. I’m utterly shocked and shattered by the loss of this beautiful, kind and wonderful person, our grand-maman Tisi. I also have a number of other feelings; anger, disbelief, nausea and frustration that she was taken from us. This at a time when she was living life with such fervor and energy. She was kind of like Sophia Petrillo from the Golden Girls.

Je ne comprends pas pourquoi qu’elle a dû nous quitter maintenant. Je croyais honnêtement qu’elle vivrait pour toujours. I pictured her as a centenarian still dancing with her walker, albeit a little bit more slowly. But there nonetheless helping us see the world through the most amazing and joyous glasses.

For all of us grandkids, she was so much more than a grandmother. She was a friend, a great cook, a confidant, a shoulder to cry on, a spiritual guide, a baby sitter, an expert card player, a quilter, a knitter and of course THE Master Doughnut maker. And it is of doughnuts that I’d like to begin speaking about today. I think everyone in this room has had dozens, if not hundreds of her little golden sweet rings of delicious dough.
C’est avec les merveilleux beignes de grand-maman dont j’aimerais débuter. Ces anneaux sucrés et dorés, de pâtes délicieuses que grand-maman cuisinait avec tellement de joie. On en a tous mangé des centaines. Et c’est la première chose qui vent à l’esprit de tous ses petits enfants.

When I asked my cousins about a special memory of grandma, more often than not, the topic of doughnuts came up. For example for Sam, when he started having more time in the kitchen, he realized that he wanted to learn how to make doughnuts. So Sam spent an afternoon with her, not just learning the how to, but that she had been making these since she was 16 years old. He’s hoping that in 60 years he’ll be able to make doughnuts as well as she did.

For Cassie, Kain’s wife, grand-maman took the time to sit with her and get to know her when Kain and Cassie first started dating. Grand-maman told her to “take care of my grandson” and Cassie said “as long as you keep making me donuts!”

And then we have her famous crêpes. When Cameron was in University he would go to grand-maman’s every Thursday for crêpes. No matter what Cameron was dealing with at University, Thursdays were always special. Eating and talking with grand-maman made his whole week. She knew how to make him feel better or provide wise advice.

Grand-maman was also a master seamstress. Je crois qu’elle a arrangée plus des dizaines de milliers de bas de culottes. Emily’s memory is when she sat with grand-maman around the sewing table while grand-maman helped her with a dress. Grand-maman showed her some tricks of the trade, only a master would know. Emily was actually working on a quilt too, and was just finishing it up and excited to show her.

Grand-maman always made our spouses feel like they’ve been part of the family since the very beginning. She loved them as if they were her own. My husband Mike and grand-maman had an ongoing joke. Bonjour grand-nez ou Bonne année grand-nez was how they would greet each other. I think it was because of Mike’s first attempt at saying grand-maman… She always laughed with such joy when she would hear that; even though Mike was saying hello Big Nose.

Grand-maman loved all of her grand-children and was ecstatic at the arrival of her three great grand-children. Right after Rutherford was born grand-maman came with a bunch of delicious food (soup, tortière, brownies) and held Ford for a long time. Grand-maman started poking him and bugging him to wake up because she wanted to see his eyes. She loved holding Myla and seeing her beautiful eyes and luscious head of hair.

Pour moi les meilleurs souvenirs son de Noël. Lorsqu’on décorait l’arbre, on cuisait des biscuits, on chantait des cantiques comme ‘l’enfant Jésus dans son beceau’, et certainement les bas de Noël. I think my most cherished memories are from Christmas. Decorating the tree, baking cookies, chantant ‘L’enfant Jésus dans son berceau’, eating great food, seeing her smile, and of course the Christmas stockings. Grand-maman made each of us grand-kids a Christmas stocking… notre propre bas de Noël. They were of the most random things like cabbage patch kids or snow patterns. In them she would place an apple, an orange and some other small gifts. La pomme et l’orange were there for us to remember what she would get at Christmas as a child. A few years ago she wanted to end the tradition, but none of the grand-kids would agree to it. The stockings were a generational tie, and one of the strongest and deepest bonds to her. We loved it more than the gifts we received. I can’t think of a Christmas without them and now without her.

We are all so very fortunate to have so many wonderful memories of her. And although she won’t be with us physically anymore… and this will hurt for a long time to come… She will live forever. Not just in our hearts of course, but in song, in dance, in slightly in-appropriate plays at la residence, in our recipe books and in those little golden sweet rings of love. Un très grand merci grand maman pour tous les merveilleux souvenirs et pour ton amour sans bornes. Tu nous manqueras pour toujours. Je t’aime de tout mon cœur. 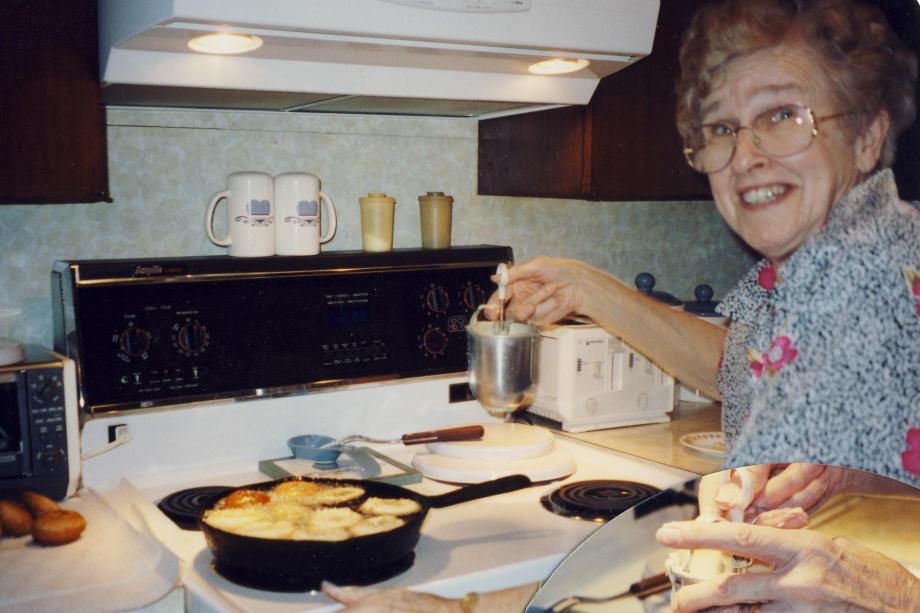 4 comments on “When Somebody Dies”