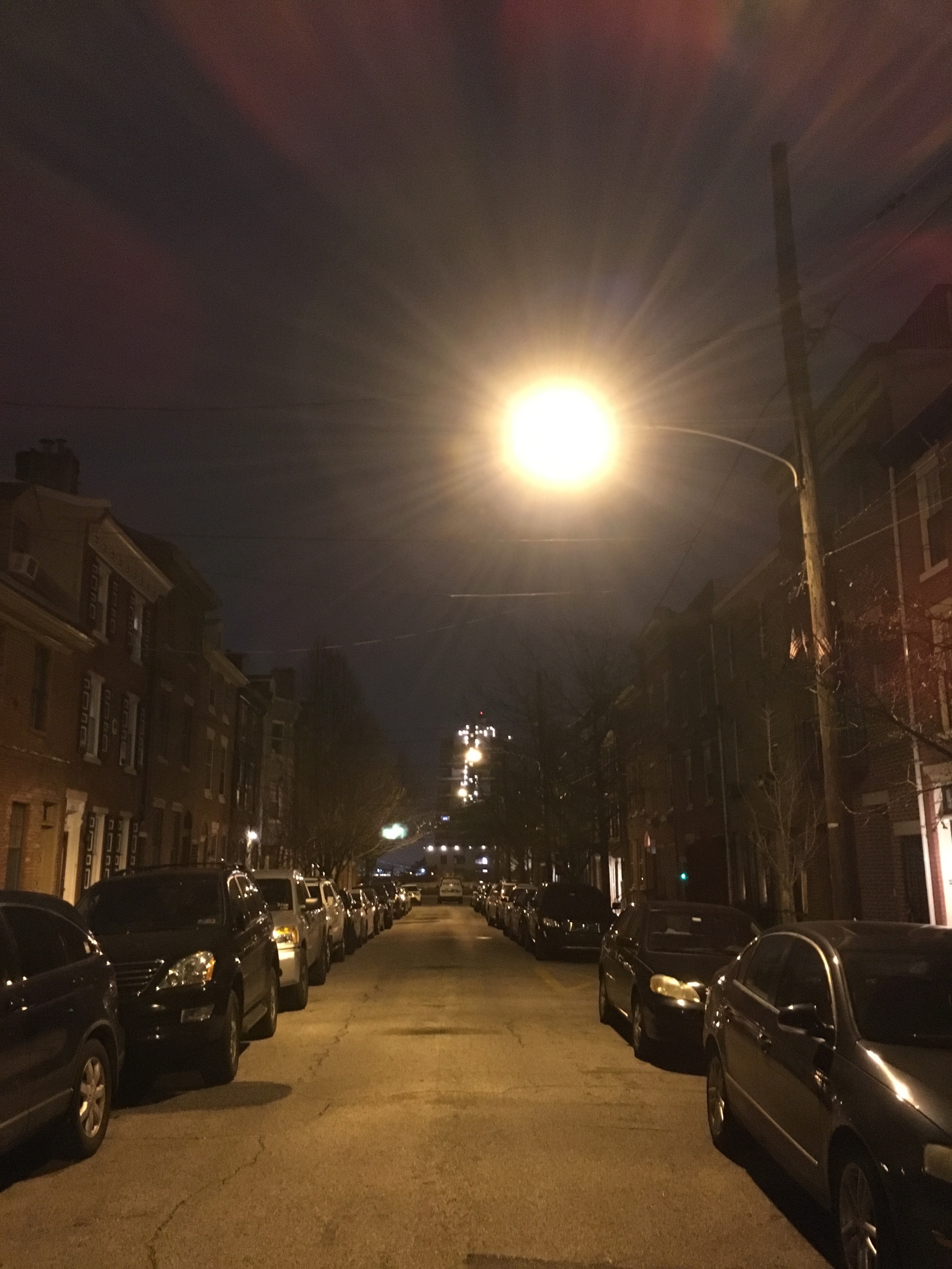 It was about 10:30pm as Derrick and I were walking home from our first show at the

Walnut St Theatre.  We had recently became subscribers to the “oldest theatre in America”.  We neared our neighbourhood of Queen Village, and when turned onto 2nd Street, we noticed yellow police tape and a police van.  I tend to steer away from crime scenes normally, but this one seemed to be blocking our route home- we have to walk through it.  Derrick asks the officer what happened. “Oh, I think it was a shooting or something”, the officer said casually.  Like he was talking to us about the weather.  A shooting, near home.  Our home.  Okay.   We keep walking and we realize the shooting happened about 40 feet from our house, right on the corner of 2nd and Kenilworth.

A shooting on our street.

Derrick and I silently walk.  What happened?  A drive by?  Gang related?  More than one person?  We don’t know anything.  Does that matter?   I push down the feelings of panic by forcing myself to be logical and to not allow myself to feel anything.  I make up stories- I’m sure the shooter is gone now. This area is probably the safest place in the city right now.  I am so thankful we went to see a play tonight.

As we approach our door, Derrick looks at me with a shattered look- “We can’t tell our families”.   This is the first time I’ve seen Derrick scared since we’ve arrived.  He has been boosting me up with confident comments of safety, and I had started to believe it.   It’s the distance from home here that’s scary- like when I get sick and I instinctively look for my mom.  With this, it’s the first time on our “American Adventure” that we felt lost.

After watching the news, we found out that a 65 year old man was attacked by two 20 year old men, and he was carrying a gun.  He shot them both, one in the shoulder/neck area, and the other in the stomach.  Derrick and I sat on the couch silently.  I felt empty; numb.  The apparent victim was the shooter, and he lives in our neighbourhood?  I just assumed that the “bad guy” was always the one with the gun.  Feel free to read more about what happened that night from ABC’s perspective here.  Check out the local chatter about the incident here.

Back in 1791, this amendment came into place as part of the Bill of Rights– A well regulated militia, being necessary to the security of a free state, the right of the people to keep and bear arms, shall not be infringed.   This is back in the day of farmers and protecting your land; when there was no emergency line to call; heck, slavery was the accepted way of the day for another 60-70 years.  I’m from Canada where I wouldn’t for one second consider getting a gun.  The idea mortifies me.  Carrying and owning a gun puts all of us in more danger.  I now live in America where people like this woman who got shot in the back by her 4 year old when he found her loaded gun in the car is not uncommon news.  Recently, I was with someone who paraded a cell phone picture of her “bedazzled gun” around to show us all how cute it was…  I was shocked.  I didn’t even know what to say. And I felt terrible saying nothing.   I don’t believe in any circumstances that heroize a gun, or violence.

I was told by a fellow “legal resident alien of the United States of America” (ie- a Canadian living in America) that guns in America are a real thing; to not be paranoid but assume your neighbour has a gun.   I don’t get it.

Don’t get me wrong- it’s terrible that someone got attacked, period.   I’m thankful that the person was able to live and defend himself.  But I don’t know what’s scarier- the fact that 2 people thought they could seemingly out of nowhere attack another person, or the fact that person who was attacked was carrying a gun on a seemingly typical evening?

The next day, I forced myself to still volunteer at Morris Animal Refuge.  I still felt My heart dropped as I hurried past the news vans and yellow tape that still reminded.

The next day, I made myself go see a movie on my own.  I looked behind my back a little more, and hurried a little faster.  During the movie, I had moments of panic where I thought someone would come in and open fire.   But they didn’t.   And they haven’t.

This incident happened a few weeks back from this post-nothing more has happened. The neighbours have said that it was highly unusual to “happen here”.  I’m getting out, I’m back to getting lost in Philadelphia.   I am carrying a little more awareness as I walk, and this incident has been a motivator to keep up on our kickboxing.  Lastly, I’m trying to use situations like this as a reminder to make the most of every day.

I’ll open it up to my wonderful readers- what are your thoughts on guns?  What are other options here to create a safer world?

Song of the Day:  This Ain’t Over (Alex Newell)   I’m going empowerment here- this is our world, and my home, after all.

7 comments on “So Guns in America are a Real Thing”