It all started July 1 (Happy Canada Day!), when I stumbled upon a random donkey while out walking.  Cute.  Wonderfully painted.  I don’t get it…

The following day, we come across another donkey, and another!  Instantly I’m hooked on exploring every street and cranny that Philly has to offer, and I needed to learn more about this project.   It turns out in efforts to build excitement for the Democratic National Convention, they have placed 57 donkeys around Philly (which we are hosting in a few weeks!).  Really, I’m just excited to find donkeys!

I’ve now made it my mission to seek out all 57 donkeys by the end of the month as that is when they will all vanish (just like Bernie’s presidential aspirations!  Too soon? 🙂 ).  I’m feeling re-energized to explore Philly again, as this gives me a set project with a clear objective: Find and document all of the Democratic Donkeys.   I thought this would also be a fun way for the Canadian to not look like an ass (get it?) and learn the 50 States (and… 7 bonusStates?).  So I’m looking to you to cheer me on, and help me find me way.  I’ve put one rule in place: I can’t look online to find the donkey locations.  I need to rely on my random navigation/strong ability to get lost, and you!

If you find a donkey yourself, post a photo here, or on twitter with the tags #LostAndFoundDonkeys and #DonkeysAroundTown, and I’ll share your moment, then track down that donkey myself, but will give you all the credit.

I’ll be updating this regularly, so check back regularly!

2. Arkansas.  This is when we learned there was more than one donkey and looked more into the donkey initiative!  So Donkey #2 = 2 photos!   This life like donkey is outside the Franklin Hotel.  It’s just off of Independence Park on Chestnut and appears to be a Marriott property for those hotel points people out there.   I’ve never stayed here, but I did get a great massage and enjoyed their lovely peaceful spa! (Thanks Groupon!).

Arkansa staying at the Franklin Hotel 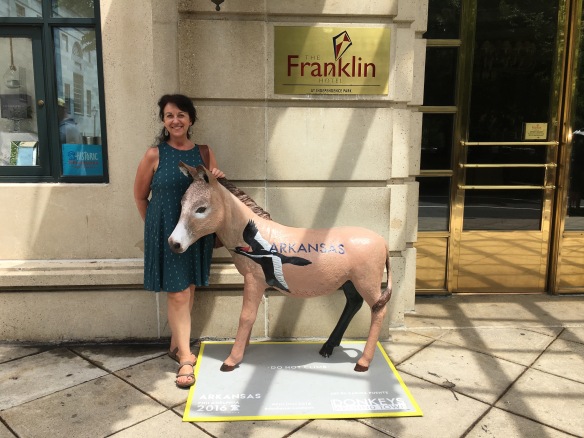 Arkansa outside the Franklin Hotel

3. California.  We were taking a City Tour on the Hop On Hop Off, and of course we caught California in the midst of a crowd (how Hollywood!).   Located at 12th and Market, this donkey also finds itself near the downtown Marriott. I’m sensing a sponsorship deal here?

4. Nevada.  Oh, what happens in Vegas appears to not stay in Vegas, and wanders to JFK Blvd and looking for Logan Circle (which used to be Logan Square, one of the original 5 Squares that William Penn designed when planning Phily).  Donkey, you’re almost there: It’s that green/cement space just ahead!

5. Maryland.  Cheering tourists and locals alike, this Donkey sits atop the famous Rocky Steps (which are actually the back steps of the Philadelphia Museum of Art).  The Museum has an extensive and impressive collection of art, if that’s your thing.  Give yourself a good few hours at least.  With every guest we’ve had, the Steps have been the most in demand must see spot, and we climb them every time!  I was very proud of Derrick, my cousin Niall, and nephew Ayden who ran/walked the steps: they did it! 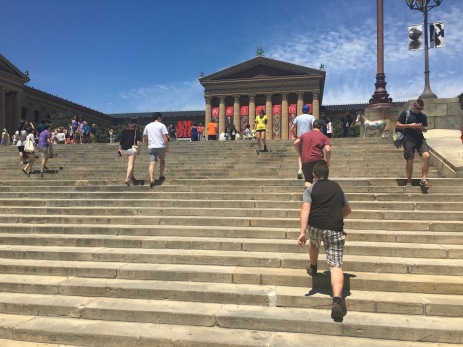 6. Guam.  Okay, so we’re including the territories as well! Awesome!  This Guam Donkey also sits atop the Rocky Steps/backside of the Museum.  I love two for one donkeys!  Notice how we have matching pants on.  #MikeLovesGuam #PurplePantsRule

7. Oregon.  Tricky!  The Donkeys are moving inside.  This one is located inside the Franklin Institute. This donkey may need to go as its right outside of the bathroom area.  The Franklin Institute is a place that is super fun interactive, with exhibits including an old steam train you can board, a giant heart you can walk through, and (currently) a very detailed Pixar exhibit that you can get lost in.  We went as a group, ages ranging 15-59, and to be fair, I think the older you get, the more fun you have here.

8. New Jersey (sort of).  We took the RiverLink Ferry from Philly to Camden in the morning to visit the Adventure Aquarium.   The ferry is only $7 return, and offers the best views of the city.  At the Aquarium, they’ve got a shark tunnel (and shark bridge), jellyfish, penguins, and even this guy.  Bobbi.  A nice way to spend a few hours. #PeguinsAroundTown? 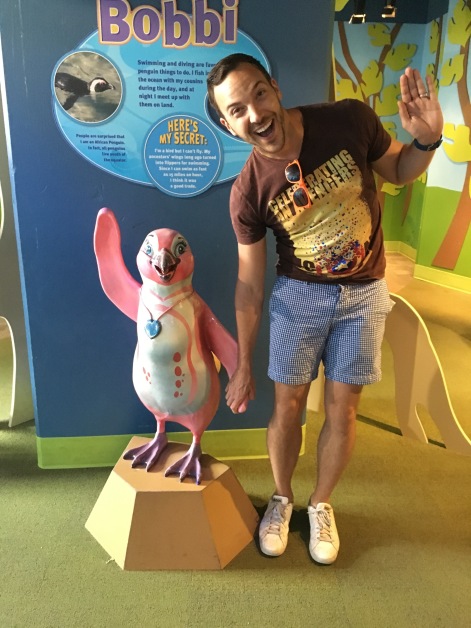 (Actually) 8. Texas.  We finally visited the rumored birthplace of the sewing of the first American flag: the Betsy Ross House.   And who greets us with a “hello all y’all!”?!  Texas, wearing a flag inspired outfit itself. 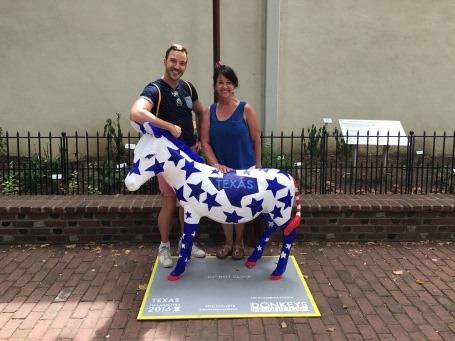 Texas making the (biggest) flag at the Betsy Ross House

9. Illinois.  Located just outside of the huge Pennsylvania Convention Center on Arch St, we find this colorful donkey!  We’ve been to this massive center for the famous Philly Flower Show, and well, to find donkeys now. Book today for a conference, a wedding, or a space to host your hometown.   Fun fact: the Center used to be the location of the Reading Railroad Terminal and Offices #MonopolyWin 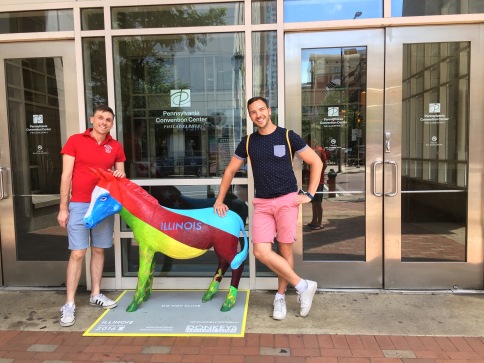 10. Georgia.  I knew there HAD to be one at City Hall.   We walked the outside perimeter: nothing.  We came inside to the main courtyard, where a random Yoga  Festival was going on (I love community spaces!), and though again… nothing.  Then tucked in the corner, like a perfect peach: Georgia!   I couldn’t help but jump for joy!   City Hall was 1 of the 5 original squares that William Penn created when designing Philly. Now, it’s more concrete than green, but it’s still one of my favorite spaces.  There’s a map of the original plan for Philly right in the middle, and even though this is located right in the heart of the busy downtown area, it’s quiet here.

11. Indiana.  Who needs to go up to the One Liberty Place observation desk, when the donkey is right in the lobby!  Recently this office building opened an observation deck on the 57th floor, which is pretty impressive: I’ve been up 3 times now!

12.  Colorado.  Oh we see you!  For some reason, this little guy was locked up inside the Heritage Center located on Broad Street.  I’m not sure what this Center is all about… it was closed!  The donkey was all pretty plain in design (I thought Colorado was the wild outdoorsy state?!) 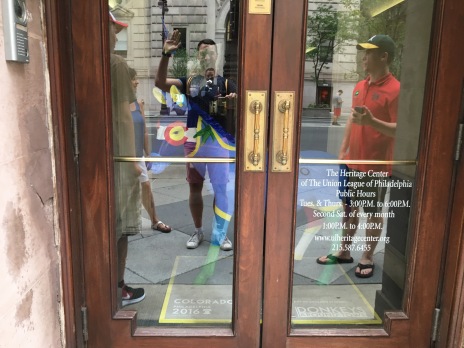 13. Alabama.  Putting on my best southern belle at he Park Hyatt.  A predicted, the Avenue of the Arts is a hub for donkeys! 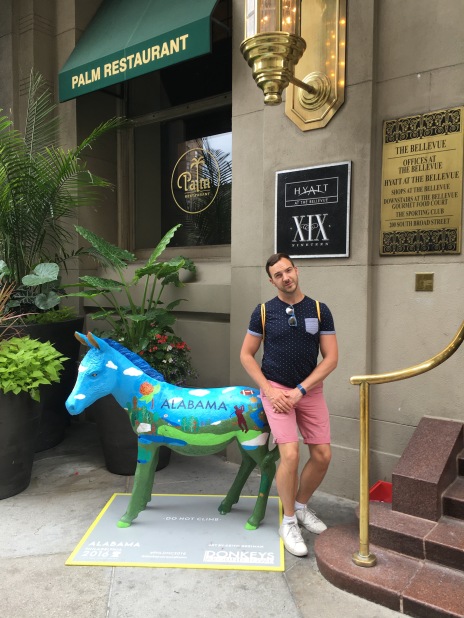 14. Pennsylvania.  Really, a beautiful donkey. It’s somewhere on Broad Street, outside some random building.  We ran through track for this quick photo.  I don’t even know.  Really?  I thought Pennsylvania would be somewhere really special: like a cheesesteak cart or something. 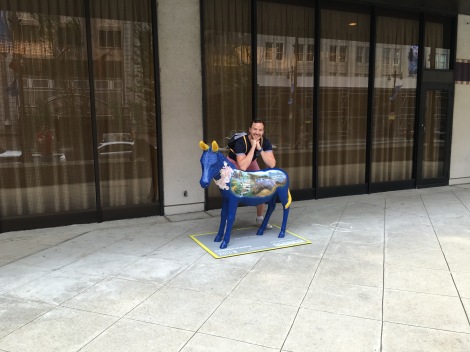 15. Democrats Abroad.   How inclusive, and creative!  Very appropriate for being outside the Kimmel Center (unlike #14… #WTFPenn?!).  I LOVE this building. Come see a show, or don’t: just walk into the grand soaring lobby! 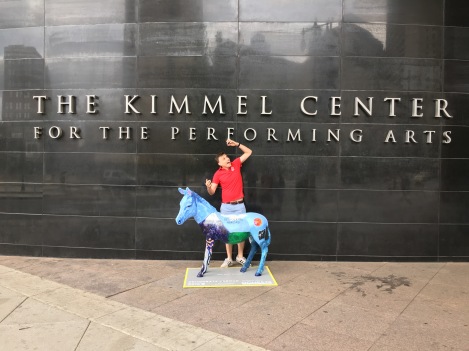 16.Nebraska.  Located outside of the Philadelphia Theatre Company (keep going south on Broad St), this donkey hangs with this international acting troupe.  Look at the (left to right) drama, the curiosity, the suspense, the… confusion!  Yet another one of Philly’s theatres! (yes, this IS an arts city!) 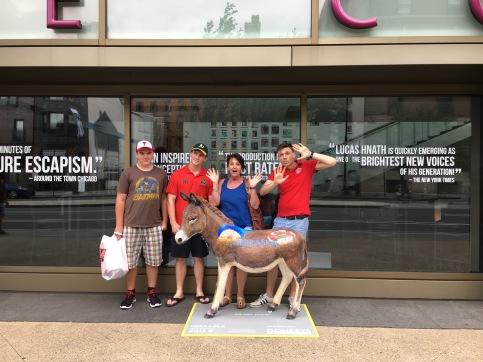 17. North Dakota.  I know just as much about North Dakota as I do about where I found this donkey, again on Arch St.  It was hidden a bit behind the cars at the front.  The Wyndham Hotel: I should check in someday soon! 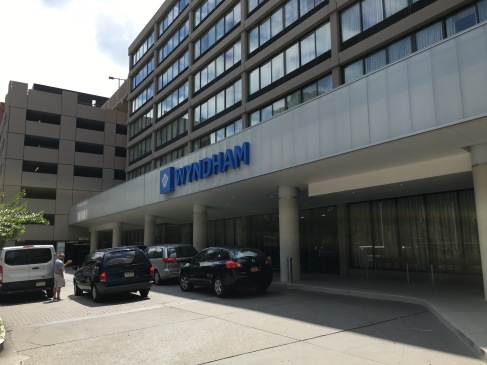 18 & 19. Connecticut AND Virginia.  Where else would I find these two, but at the great pop up Beer Garden at Independence Mall!   A perfect stop anytime this summer for a drink or a bite to eat (the salads are surprisingly REALLY good).  Also, play ball toss, or jenga at your table.   Philly is home to (at least) 26 pop gardens in the summer, so get there and check them out!  They’re usually bustling but not so busy that you can’t get a relaxing break after a long day. 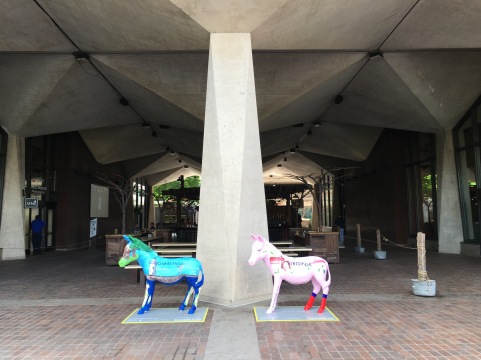 20. Idaho.  No potatoes here, Idaho is looking for diamonds and is located at Jewelers Row!  Located in a T-shape cross of streets, this is where to go for your Philly jewelry needs. Every shop in this area (except for that random pizza place) is a jewelry store!  My diamond was finding ANOTHER donkey!

I included a 2nd photo here: poor Idaho had 2 of its legs broken.  #StayOffTheDonkeys 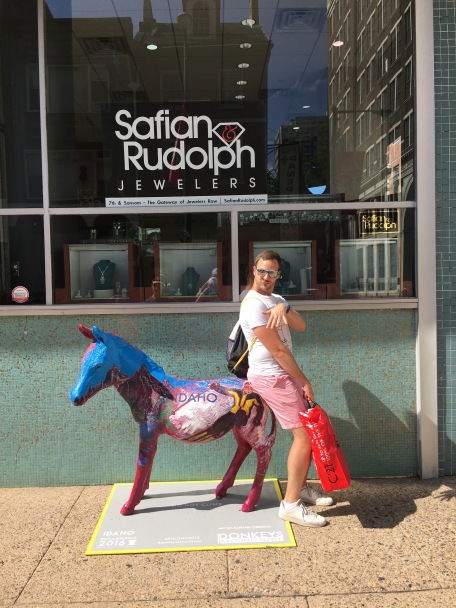 21. West Virginia.  This donkey is waiting in line to check out the National Liberty Museum!  Some of the locals give this place a bad name because of its randomness, but that’s why I love it! 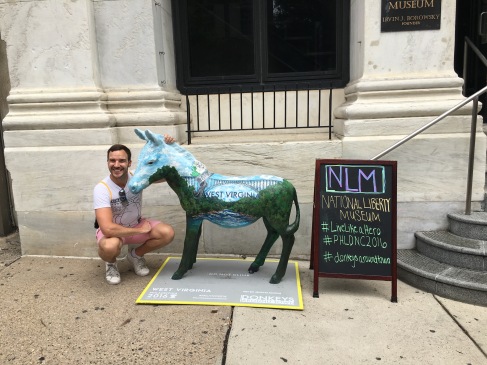 22. North Carolina.  This donkey is either waiting in line for one of the best cheesesteaks in town, or can’t decide which bathroom its allowed to use.  Maybe both?  Jim’s is quite popular, but I would say for a reason.  They make darn good cheesesteaks.  Yum. 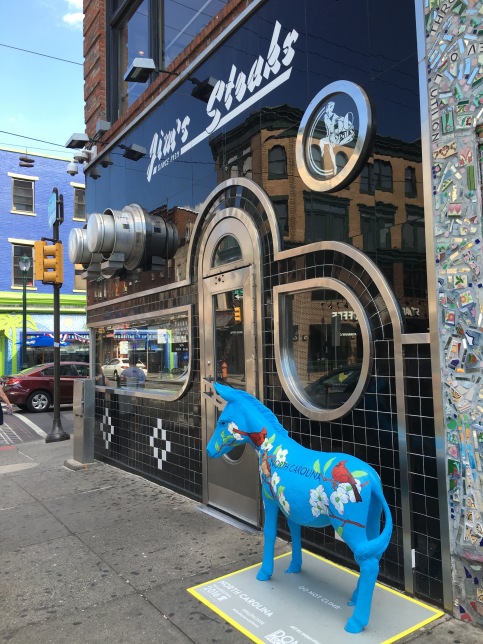 23. Washington. Hello Donkey, I’d like a table for four please!   Found at one of the founding fathers’ favorite pubs, this donkey is at the backside of the City  Tavern, and is not succeeding at being an effective host.  City Tavern is another ‘tourist spot’, but I think for a good reason.  It’s a lot of fun: The serving staff dress in historic garb, and the food and drink are all based on actual recipes of George Washington and friends.  Seeking colonial food like turkey pot pie?  This is your place.  And the little pecan bread they serve at the beginning alone is worth a visit.

24. Tennessee.  SummerFest is where this donkey is, hanging out at the side lines as roller skaters whiz on by.  I love being down by the water and this summer pop up is similar to WinterFest, only less heaters, and more sunshine.  As this donkey reminds us (because really who roller-skates more than once a decade?): safety first ;).

25. Vermont.  I found this donkey when I was out for a run, tucked inside of the Independence Hall Visitor’s Center.   To gain entry to Independence Hall (where the Declaration, and the Constitution were debated and written), you need to pick up day of tickets from here.  Vermont will point the way!   #CowsEqualDonkeysEqualLove

Sound of the Day: Donkey Sound

Song of the Day: I’m a Believer (being covered by the one and only Donkey)

6 comments on “The Original 25 #DonkeysAroundTown”