I wish I could say it was a dark and stormy night when things went wrong.   In reality, it was a very mild February night at about 8pm.  Derrick and I had just finished dinner, and were walking to the Riverview movie theatre that’s about 15 minutes from our home.  It started off as a very typical Friday night.

It’s mostly quiet.  A few blocks from our house, we pass a group of “young kids” hanging out at one of the less busy streets.   I’d guess 16-20 in age, and about 12 people in total.  A mix of male and female.  To be fair, I don’t really pay all that much attention other than a passing look.  I only remember because of what happened next.

As we move along, I notice the group starts to move.  Okay, but they are a little close.   An odd feeling came over me.  Small at first, but it stays.  I check my bias about “kids these days”, ignore my gut, and carry on our way.   Yet, they are getting closer to us- I could feel it.   Odd becomes uncomfortable.  A man with his dog walk towards us, and I feel the group slow down and stop again.  Okay, not a big deal.  I’m being hyper sensitive.

When the man and the dog pass, I have that feeling again.  Something is off.  I’m a person who walks down back alleys (when I probably shouldn’t), who talks to strangers in the street, and as my mom frets about, I  trust people a little too easily.   I’ve been very grateful that during my 9 years living in Toronto and my one year here Philadelphia, as well as touring the world, I have yet to run into a bad situation.  And that’s what made this scenario feel so … scary.

I look to Derrick and suggest we move a little faster.  We are pushing it to make it to the movie on time anyways.  We gear up into a swift power walk.   I glance over my shoulder, and behind us about 10 feet, the group is keeping pace.  Okay, let’s cross the street.  It’s time to do a gut test.

About 2 seconds after we get to the other side, one of the group members runs across to the side we now are on.  He’s about 20 feet back.   Okay, check bias, clock the situation, breathe Michael.   I look to Derrick, and ask if he thinks we’re being followed.  My whole body is pins and needles, and I can’t ignore it at this point.  He glances back, and doesn’t say anything.   I look back, and notice the guy behind us is walking even faster, with almost a run in his step.   I check in with Derrick again: “Derrick, we’re being followed.  I am really sure we are being followed”.  I look down at my mittens- should I take them off?  Do we stop?  Do we run?  It’s at this point we notice that directly across the street is another guy walking as fast as we are.   He’s broken away from the larger group, which is trailing a little behind.   My mind is present.  I could be overreacting, but I do know that we have one guy on the same side of the street as us, now less than 15 feet away, and another keeping pace with us on the other side of the street, trailing maybe 5 feet.   My entire body is alert.

At the upcoming intersection is a pub called For Pete’s Sake.  It’s a safety beacon that may or may not just be in our range.  30 feet.  20 feet.  I have no interest in finding out what may or may not happen.  We do a we’re-running-a-bit-behind dash to the pub, swing open the door, and tumble inside.

We turn to out the door.  I’m hoping that the group has continued on, that we were making things up.   Instead, the one guy who had crossed to our side is crossing back to rejoin the larger group.   And they stop on the corner, directly across from the pub.   I finally let the adrenaline out, and acknowledge how shaken I am.    It’s shocking to go from a state of primal fear to a sense of safety in numbers in one moment.

Stephanie, the welcoming server, breaks me out of my frozen state: “Did you want a seat?”   I look up and blurt out, “We were being followed so we came inside to hide.”  She instantly becomes protective of us, and asks us what happened.  We point that the group is still outside, as we shy away from the door, and duck out of sight.  She goes out the door, yells at the group, and they yell back, but do wander off.

We decide to take a seat at the back, and gather our thoughts.  It’s crowded with cheer, and I’m grateful to be able to blend in.   We order a drink, and replay again and again what just happened.   It could have been much worse, and every fiber of my being assures me it would have been.   I’m so thankful we were alert of our surroundings and noticed before it turned for the worse.  The questions pour through me.  Why us? Why tonight? We look rather frumpy tonight- what was it?  What is going on with people?  Were they just trying to scare us, or steal our phones, or hurt us?  We are looking for any justification or explanation.   We play out other possible situations of what the group could have been doing… it was all assumptions.  And thankfully we will never know.

It’s at this point a dessert arrives, and the server gestures to a group of women: “They thought you might want a dessert- it’s on them”.   Then a few moments later, we’re told that a few guys bought us another drink.  The couple next to us starts making small talk, and Derrick, unfiltered, gives them the entire story of what happened.  They offer to drive us home, and even though we live about 5 blocks away, we accept.   On the way out, we thank the women who bought us the dessert, and the guys who bought us the drink. These small gestures make a world of difference.  Thank you for the treat, but more for so showing us we are not alone.

A few minutes later, we’re inside our house.  We look at each other.  And pause.  And cry.  Derrick posts on an online neighborhood board about our situation, and calls the police to make a report.  Although I’ve felt unsure at times, I’ve never felt fear like I did tonight.  We know it could have been much worse.  For tonight, I’m thankful to be home.

The next morning, I look at a picture of the dessert that the women had bought us.  Donuts.  It suddenly brought me back to my very first blog post: Home is Where the Donuts Are.  I’ll take it as a sign. Out of nowhere our Friday night had turned upside down.  It was a reminder that this kind of thing can happen to anyone at anytime anywhere.  But fear can’t, and won’t win.  In this dark moment, we saw the brightest.  A community of strangers did what they could to help us feel a little better in a tough situation.  They listened.  They offered support.  They brought us donuts.

On Sunday night, we walk to the movies. 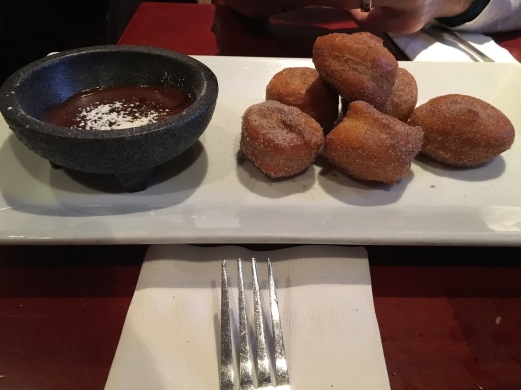 Song of the Day: Kids (One Republic)

15 comments on “It’s Not Always Sunny In Philadelphia…”