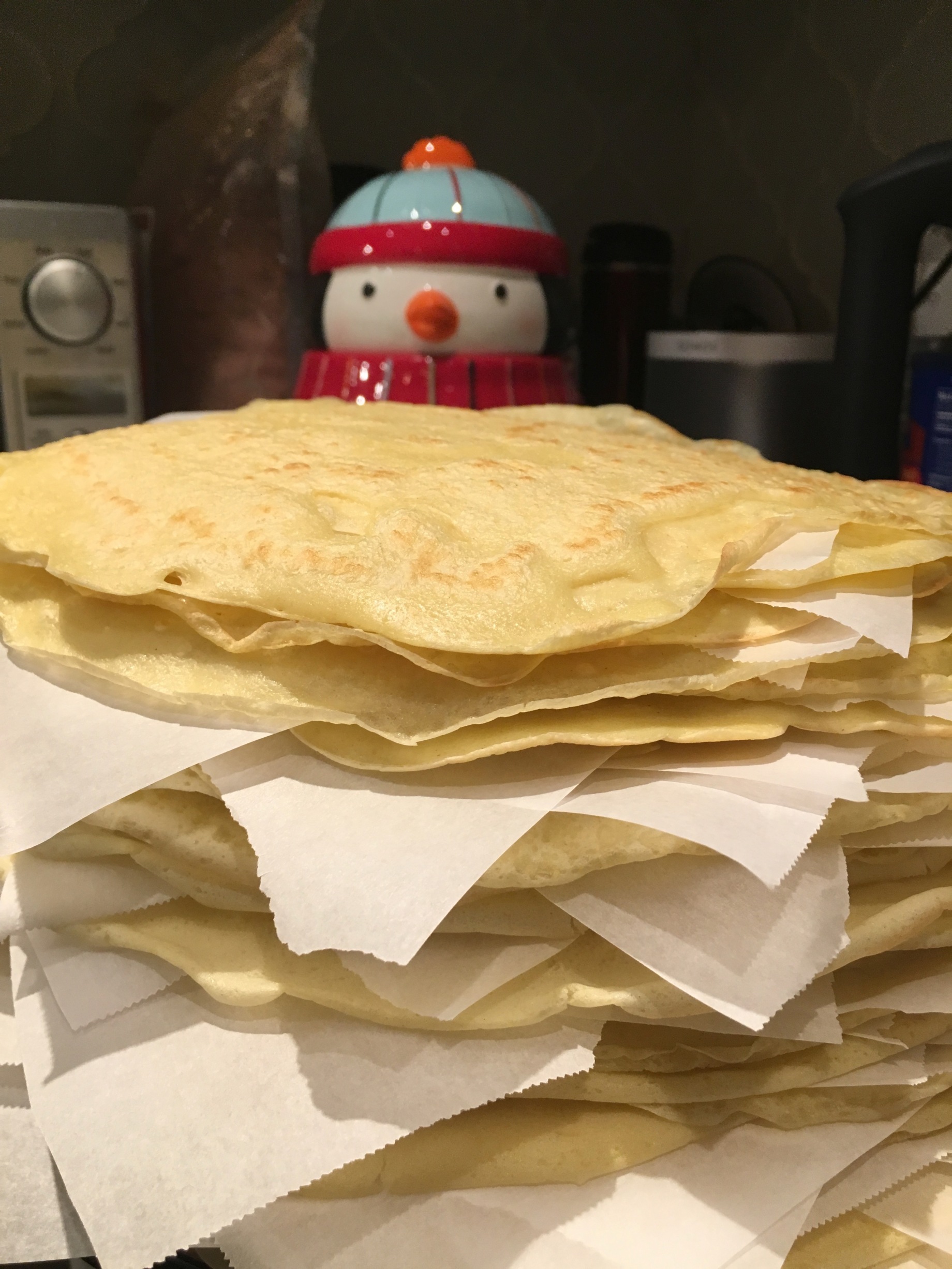 New Year’s Eve brings a heightened sense of reflection, tradition, consumption, connection, and celebration, so I thought it fitting that my final post of 2016 focus on just that!   I am conducting my 2nd interview post (if you count the one with my cat) with Derrick Louis Fournier, Crêpier Extraordinaire (and occasional blog poster who I happen to share a marriage with 😉 ).  who hosted his 15th year of  Holiday Crêpe Parties in 2016.   When Derrick and I started dating, I was introduced to my first Crêpe Party, and it quickly became one of our most cherished traditions.

So for those new and those returning, come with me behind the apron, and learn the true story on what this holiday celebration means to Derrick (and as a bonus, how to properly roll a crêpe). 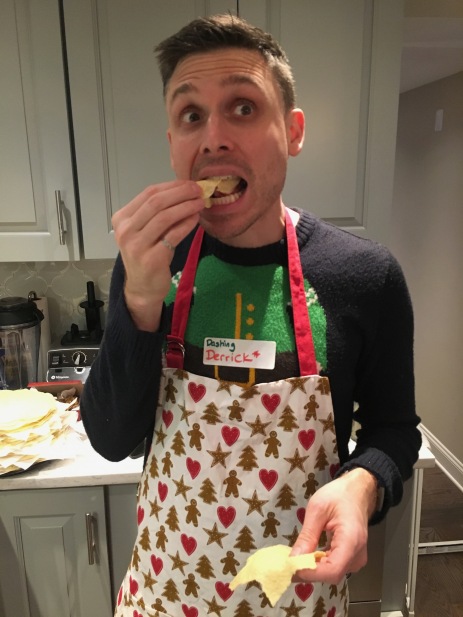 Mike:  Thanks for coming in today.  So… crêpes eh?

Derrick: Well, food has always been an element that brings my family together.  When I was younger, my grandmother would always make crêpes or french toast when we would stay over.  She would make french Canadian crêpes, which are a little thicker than Parisien (they have baking powder in them).   At Christmas time, my mom would make traditional thin crêpes, filled with whipped cream, fruit, and chocolate sauce on Christmas morning, and these always reminded me of the holidays.   So I had these 2 important family events around crêpes and I wanted to share this love for this thin piece of dough with friends; which is why I started my first crêpe party back in university when I was living in residence.   It was the end of exams, and I had invited friends from the floor, residence council and staff that were still around to enjoy the crêpes before we went home for the holidays.  At that time, I also supplied all of the toppings, and I made a big fruit salad, so people could just come and enjoy.

M: Give us an overview of what this “Crêpe Party” is all about:

D: At the Crêpe Party, it’s a gathering of friends and family near the holidays (before or after), where I supply the 2 styles of crêpes, and now, guests bring the toppings; sweet or savory.   The flavors change year to year depending on what people bring.  It’s always a surprise.   Seven years ago, we also began asking guests to bring a non-perishable food item for donation because we may be fortunate enough to celebrate over this delicious food, not every is as fortunate.     A nice, and simple way to give back.

M: When did you know this would become your holiday tradition?

D: Actually, at the first breakfast, I hoped it would.  And I hoped it would grow every year.  I had this vision of bringing people together to share in something that’s always been near and dear to my heart, and it gave me a chance to make a tradition of my own.

It has indeed grown every year and now has become an event that our friends look forward to.  When we told our friends we were moving, there was a sense of disappointment… because they thought the crêpe party would end (snickers to self). 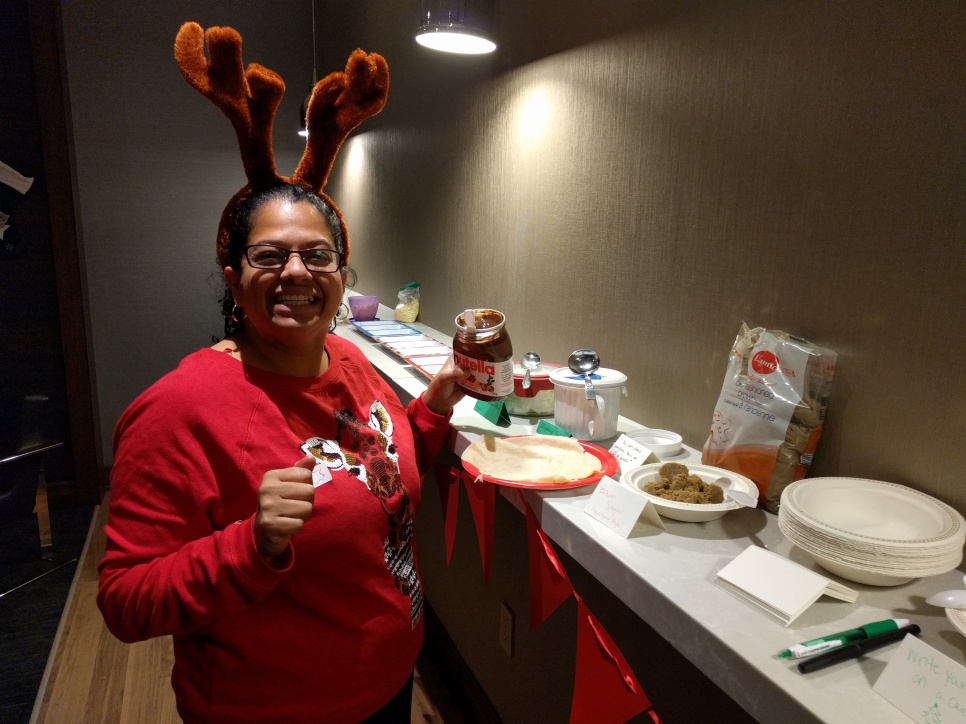 M: It is a pretty unique tradition!  What’s been the most stand out toppings from over the years?

The most revolutionary part of the crêpe party was when savory toppings were introduced.  This was five years ago in Toronto when Steph McCrae brought prosciutto.  Prior to then, it was sweet: spreads, fruits, Nutella, brown sugar.  The savory added a different element and feel.  It didn’t feel like a sugar overload.  Some of my favorites include the “Hawaiian” (ham, cheese, pineapple, bbq sauce).  Caesar salad goes quickly.  And Nutella of course (this year we ended up with 3).  Biscoff spread was one of the sweetest.  It’s even started a competition between guests of who can bring the most popular, the most creative topping.

M: What was your favorite memory from this year’s celebrations?

The fact that we could do one in Toronto (where most guests had attended a pervious party), and one in Philly (where it was new for most of the guests).  I think that’s pretty special.  We could keep the tradition going in Toronto, and start something new in Philly. Across the 2 events, we had close to 50 attend which makes it the biggest year yet.   Just like I hoped it become would years ago.    Also, with my grandma passing this year, it was even more meaningful to speak about the traditional crêpes, what they mean to me, and share her legacy with others. 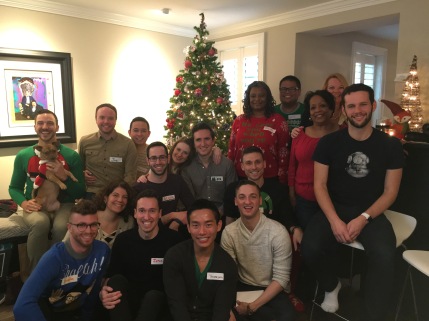 Where does the crêpe party go from here?

Well, we’ll see!  Maybe we give out puppies?  If it continues in Toronto… In Philly, as we build more roots here.  And always, we love seeing what new and innovative toppings arrive!  I’ve always had the idea of doing a community breakfast, where people who have never had them, or can’t afford them, can share in the crêpe experience.

M: Last question. If you were to have one crêpe topping, what would it be?

D: I’m traditionalist, so on the french Canadian side, brown sugar.  Not maple syrup.   On the thin ones, sliced banana and strawberry, with whipped cream.

Song of the Day: C’est dans le temps du jour de l’an (Derrick and his grandmaman would sing this every New Year’s ❤ )