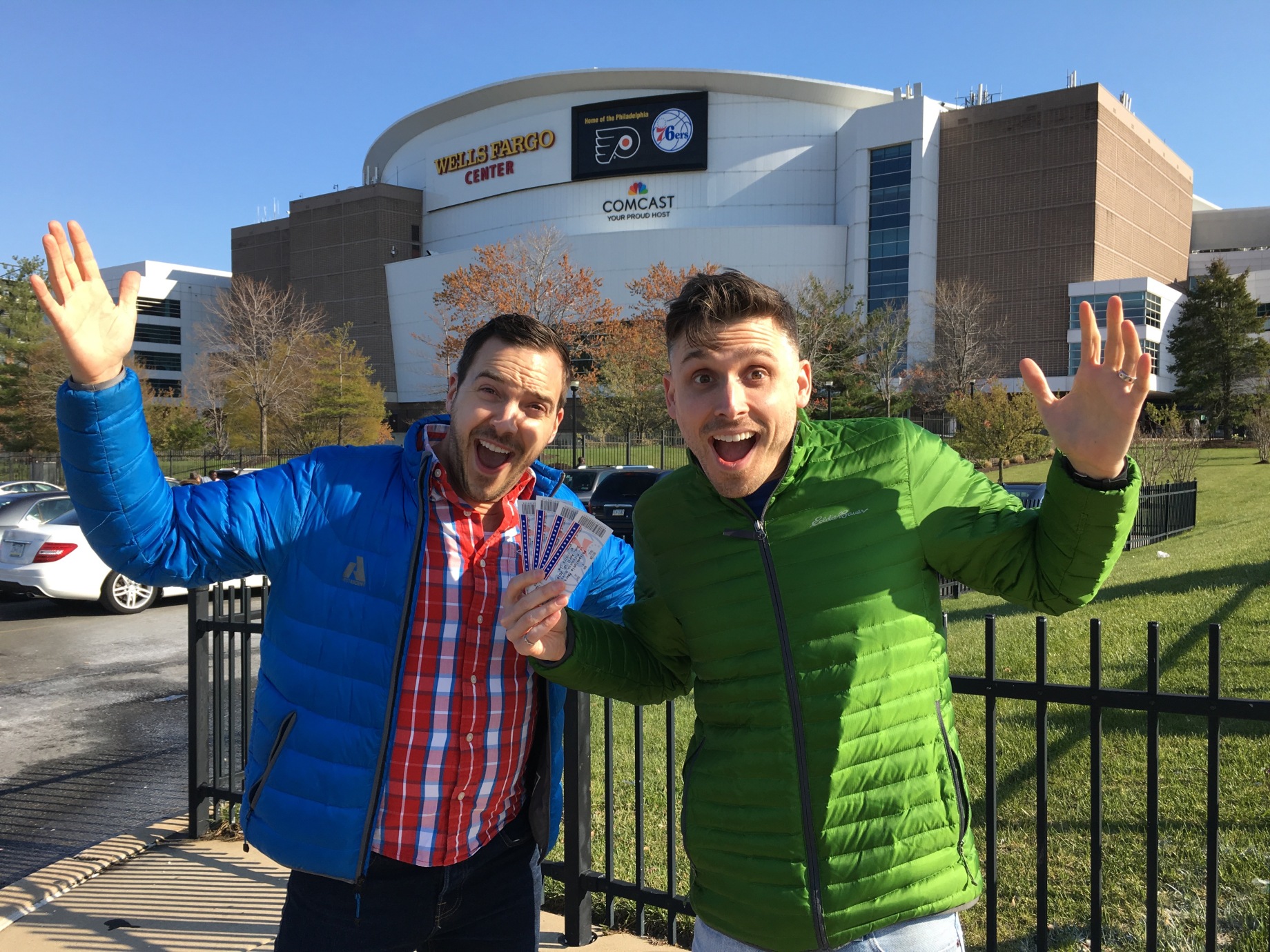 We don’t watch sports, but we are Newly Landed Resident Aliens (and open to doing pretty much anything), so we decided it was our duty to engage in the sports scene here in Philly.   It’s the American thing to do isn’t it?  Our first game would also be our very first NBA game: The Philadelphia 76ers!

We hopped on the Septa Train (think TTC only… not updated), and zipped down to AT&T Station to the South Philadelphia Sports Complex.  It’s an impressive area with 3 arenas and one very large bar connecting them all.   Clever to put the NBA, NCAA, BLT, MLBA, and NHL all in one area.  Or dangerous, depending on your idea of fun.

We have heard more about the Philly Sports Fans reputation than the actual sports teams.  The rumor is is that they are quite… passionate.  We were told “do not wear the colors of the opposing team”, “they can be… aggressive”, and “oh…” (see article).

Even before the game starts, this reputation starts to come to life.  The Milwaukee Bucks enter to zero fan fair; I don’t even think they turned the lights on properly.  Not one clap echoes throughout the arena: the silence is deafening.  I’m on the edge, waiting for something to happen.

Then… the fire starts!  The cheers roar!  The floor shakes!  The 76ers (known as the Sixers) are introduced one by one, each with fanfare and flames!  Pretty impressive, and a great example of the home team advantage.  It’s an energized kickoff.  I’m feeling excited about this.  Sports can be fun. Sports can be even more fun sitting in box seats with easy access to a bar and cheesesteaks.

The game gets moving, and I quickly become enamored by the fans.  Every single time the Bucks scored, a loud boo would fill the arena.  FILL the arena.  This is not subtle.   When the Sixers get the ball: applause!   If the Sixers score: more applause!  If the Bucks do anything: booooooooo!

Always a fan of the underdog, and feeling a little bit tipsy from a few drinks, I decide to start cheering for the Bucks.  Sometimes one person makes a big difference, and why not have some fun.  And really, it’s all fun and games, right?  The Bucks score (again) and I give an energetic yelp and a warm yet hesitant clap.   A 6 year old girl in front of me turns around and looks at me with a surprised face.  I don’t engage.  The Bucks score again, and I clap again.   She looks to her dad: “Why is he doing that?”  She glares back at me.   I look to the side of her face, now afraid to make direct eye contact.  I have been served by a small child.  You do not clap for anyone other than Philadelphia.

Then something horrible happens.  Derrick starts booing.   I panic, and fear that I’ve lost him.   I shake him and say “Be Canadian!”  He rebuttals with “This is our team now”.  I won’t accept this attitude.  Going forward, anytime the Bucks score, I clap inside my head, and glare at Derrick.  He is mostly silent.  When the Sixers score, I clap as well. I get it, the Sixers are our team now.  The booing just doesn’t sit right with me.  It sucks so much energy from the experience, and I’m not buying into it.

As the game moves along, it looks like the Bucks are clearly going to win.  They’ve had at least a 10 point lead and it’s moving onto the 3rd Quarter.  But if the Sixers get more than 90 points, we all get 50% off Papa John’s Pizza.   My cheers grow louder as the points get higher!  PIZZA!

With only a few seconds remaining, the Sixers manage to tie the Bucks.  They pass 90 points (meaning pizza for dinner!).  T-shirts are tossed into the audience, and cheerleaders cheer: It’s overtime!   The next 5 minutes are an intense back and forth, but the Bucks ultimately win by 1 point.   The fans literally just get up silently and leave when the game ends.  I clap to the overall experience: we had a lot of fun, and now I know what to expect.  But the booing… I guess it could have been worse (go Blue Jays…).

I look to my neighbours as we get up, and smile: “Good game, eh!” 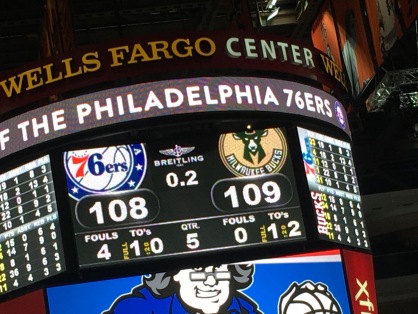 What energy do you bring to sports experiences?   Would you boo, or just cheer?   Am I too sensitive?   Would you dare to wear your team’s colors at an Away Game (in Philly)?  Papa John’s anyone?