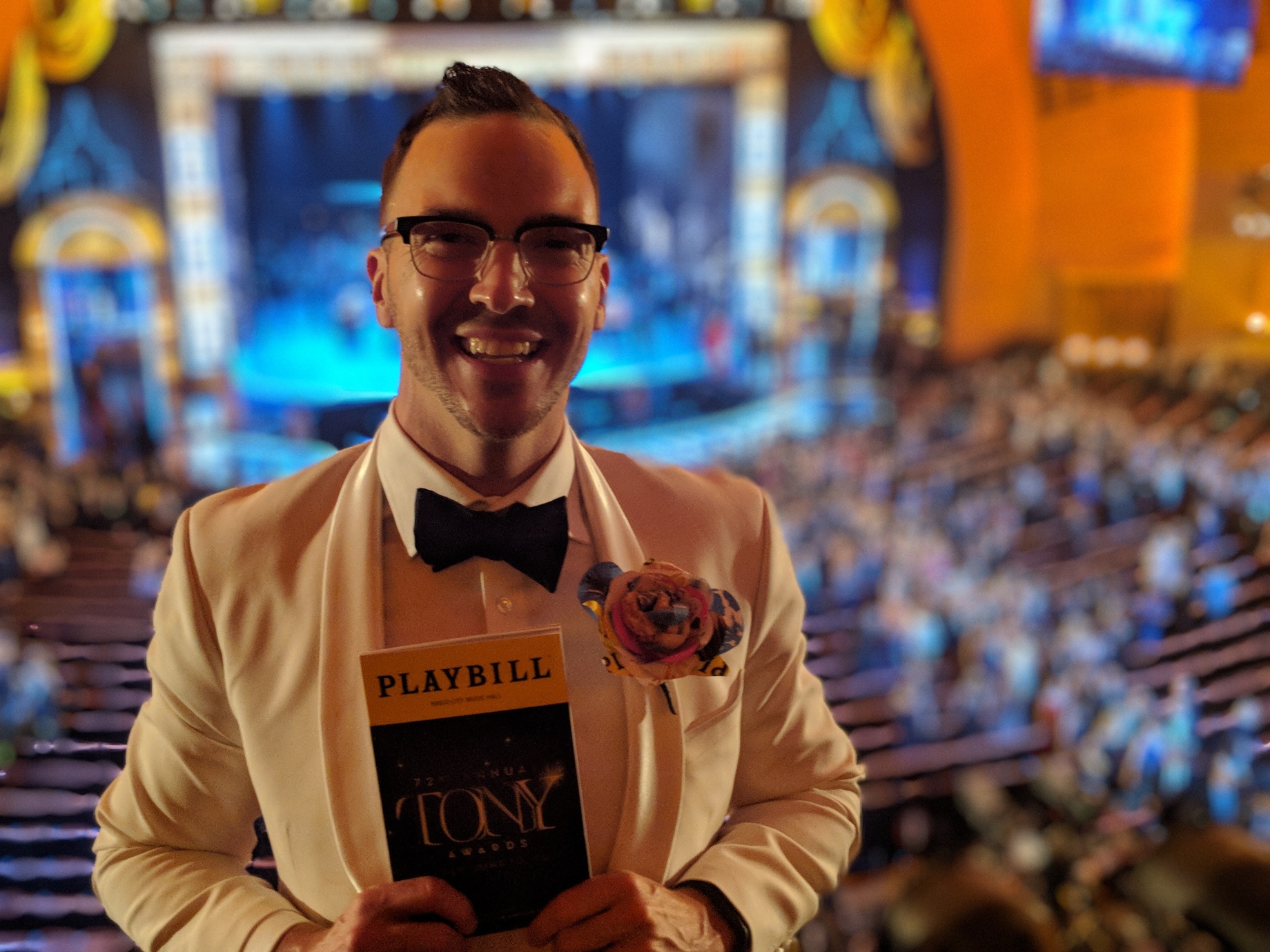 In one of my recent posts, I wrote that one of the best things about living in Philly is being so close to New York City.   As a huge theatre fan, I’ve loved being able to hop on a $15 round trip bus ride to see more Broadway than I’d ever dreamed of seeing.   And tonight, that joy of being only a red carpet away was amplified, as we got to go in person to the show that celebrates the shows: The 72nd Annual Tony Awards. 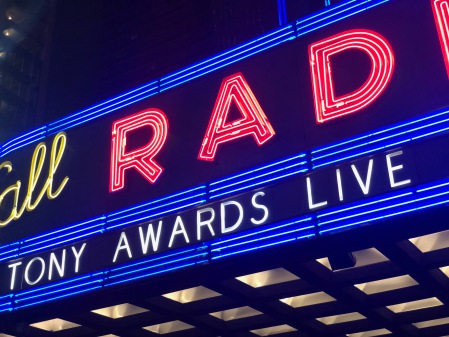 Although I was completely fine changing in a sketchy parking lot, Derrick thought it best to get a hotel in NYC for Tony’s night. This way, we could get ready for one of the biggest nights of our lives with the comfort of a sink, and no worries about driving home late after the show.  Best Musical and Best Play boutonnieres: check!   Reuse of wedding tuxes: perfect!   Bobbing along to the Spongebob Squarepants soundtrack: You bet!

As we were being so mindful about how exciting the night is going to be (bigger than our wedding night!?!), I swear to Glinda, we suddenly were out of time.  We manage to fix our faces, tie our ties, and finish getting gala’ed up, just in time.  On the way out of the hotel, people say congratulations to us.  They either think we’re nominated, or that we just got married, so we just say thank you, and move along.  As it starts to rain, our friends pick us up, and we zip off to the Tonys/sit in NY traffic. 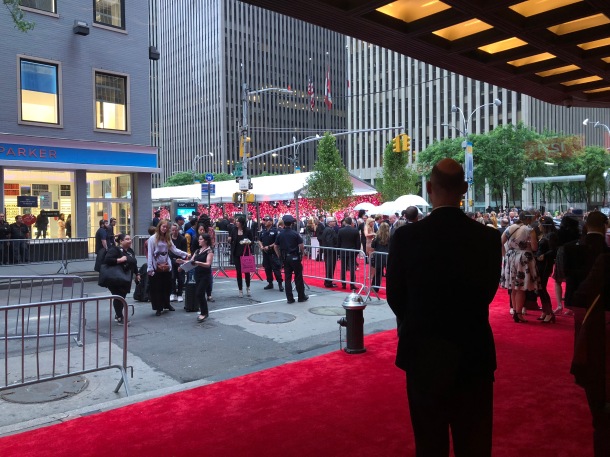 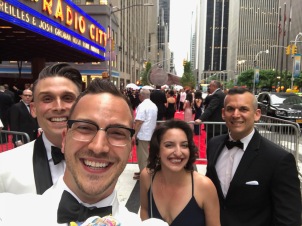 We arrive at the electric Radio City Music Hall, and step out into a crowded blocked off street.  Cameras, noise, and people are everywhere.  We take a breath, and… step to the left of the red carpet.   The staff usher us inside a little faster than I’d like, but thankfully the red carpet covers the entire main entrance, so we still have our moment (the carpet is so plush!  I wanted to reach down and touch it, but the inner theater snob got the best of me).  It’s buzzing and incredible.  I casually stare at Gavin Creel from Hello Dolly as we wait in the security line.  We’re  surrounded by so much drama!   Once through, we enter the beautiful historic lobby.   We have enough time to wink at someone who I think is in a show, before we are ushered up to our seats. 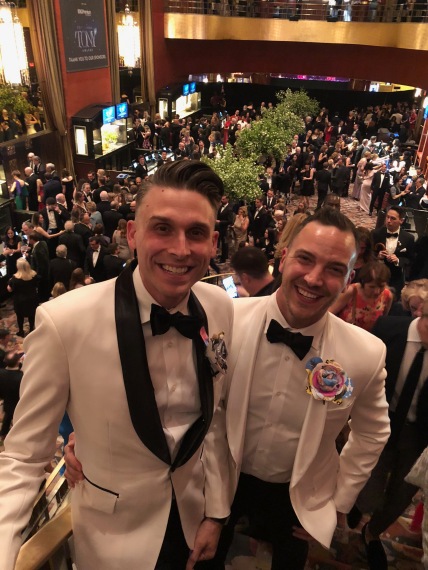 Thankfully, our seats are front row center on the second mezzanine, so we have a perfect view of the stage, and the entire broadway community below us.   I try to pick out who was who in the audience.  It was surreal, just watching them, taking in the talent.  It’s like figuratively and literally we are floating above a room full of famous people.  Anna Wintour is easy to pick out with her distinct hair cut and yellow dress.  Tina Fey too, because… she’s Tina Fey.  Even though this is real life happening, it’s impossible to process.  The 20 year old theatre kid is screaming with sentimentality and dreams coming true.

Unlike the televised show that begins at 8pm, the Tonys actually start at 7pm.  For the first hour, all of the special Tonys are presented, we are given instructions on how to behave for the cameras, and a few of the technical awards are given out.  We are given a countdown as 8pm approaches.   Camera people position around the award nominees that are first up.  Enter Sara Bareilles and Josh Groban.  An assistant smooths out their outfits.   4, 3, 2, applause.  It’s show time. 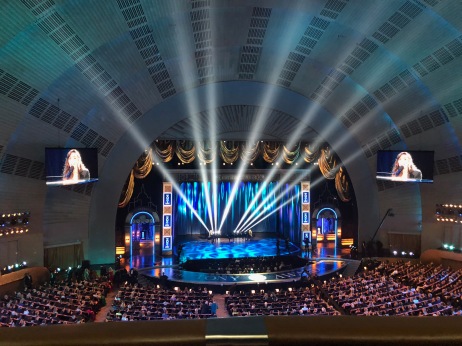 I won’t go into the full show review at this point:  You may have viewed the ceremony from the comfort of your own home.  You may have heard my screams when Spongebob and Mean Girls were robbed, and that the most inspiring performance of the night was by the Parkland students.   Maybe you’ve used the Robert DeNiro gif?  For a Broadway season that didn’t have any many new shows  (as many long running shows are still selling out), the general review of the evening was a charming, beautiful, inspiring night.   For me, it’s one I’ll always remember.  So instead of a show recap, I want to share a few behind the lens moments that you didn’t see on TV.

So what happens during the commercials?

All of the designer awards that are announced simply as “earlier this evening” is what happens!   We got a little trivia and history occasionally, and this was also the time for a super quick bathroom break.  Literally, the show doesn’t stop except for 10 seconds before things go back to air.  What I loved about this is we got to see the full acceptance speeches without filter.  Leading to…

What did Robert DeNiro say?!

F#(k Trump, twice.  I am confident that it was not on his teleprompter.  What was more remarkable was experiencing it in person, with the audience.  From a gut reaction place, we cheered, more authentically than anything else all night.   It’s a hopeless state for many people, and this moment reminded me that even stars are people too, who are living and feeling things just like us.  Although it wasn’t a very productive comment, it was a unifying one.  CBS can’t sensor real time, and that was something special.

Those live performances, and those sets, and the snow?!

Again, the show never stops.  The cameras move in and out, up and down seamlessly.  They drop a screen down, and the next musical moves into place.   How the actors get into costume and come back to their seats without a hair out of place is still a mystery to me.   A lot of the sets were simplified or digitalized for tonight, and a number of shows.  All expect Once on this Island, where they brought in the rain, the sand, and even the goat!   And that Frozen medley was pretty magical eh!  Did you notice that during the Frozen performance, it looked like it was snowing on stage?   Spoiler: It wasn’t snowing, or even fake snowing.  The snow was dropped directly in front of the camera from four people on the 3rd Mezz front row.   So that snow flurry you saw on TV, was a few handfuls of fake flakes.

And the Best Awards Moment Goes To…

The highlight award of the evening was when the beautiful Once On This Island won for best revival.   The authentic surprised energy shot through the roof.   It looked like My Fair Lady’s to win, so to share this upset-but-so-deserved moment in real life, where we could feel that shock. Indescribable.

As Sara and Josh close out the evening, I stand and watch as the crowd exits the orchestra below.  Four hours later and the Tonys are done.  After a tragically weak attempt to sneak into the after party, we decide late night food is the next best option.  Serendipitously, we end up surrounded by stars anyways at a late night dinner called Galaxy (where officially, we win best dressed).   This simple quiet moment was the perfect finale number for our awarding winning dream night come true. 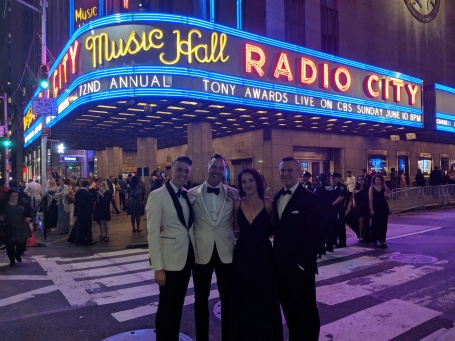 A few days later, I still can’t put the right words on the experience.  To steal a line from that little Tony winning show called Hamilton: To be in the room where it happens…  What a show.

But wait—– I read this post wanting to know one thing— How on earth did you get tickets?!

If you’re not invited, buy your way in!  It turns out, a small amount of tickets are released about a month beforehand.   The key is being online the moment they go on sale.  In true Ticketmaster fashion, there is a delay, and the pause.  Then, I’m in, and there are a few rows of seats!   I hoover for about 12 seconds to check out pricing, and decide it’s worth slashing our food budget.  “Verifying”…. and all of the tickets were gone.  In less than 35 seconds.  Gone.  Yet!  I’ve learned the trick of the 5 minute refresh.   If a show sells out that fast, hang out and refresh, and often magic happens.  One seat appeared.  Then boom, a pair!  My heart, brain, and bank account begin debating, until the voice of my very responsible risk adverse husband makes the decision: Just do it.  So with a click, we’re going to the Tonys!  See you next year?  So Fetch!

Song of the Day: This One’s For the Losers

ps: Spongebob the Musical is so much better than you’d ever dream of.  We caught it earlier in the day (#loveNY).  It’s super clever, has fantastic sets, and is just a truly original piece of theatre.  This face is the best review I can give: 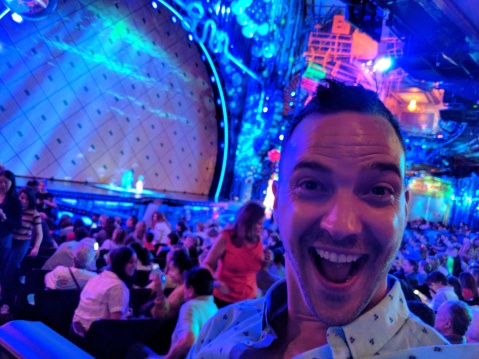 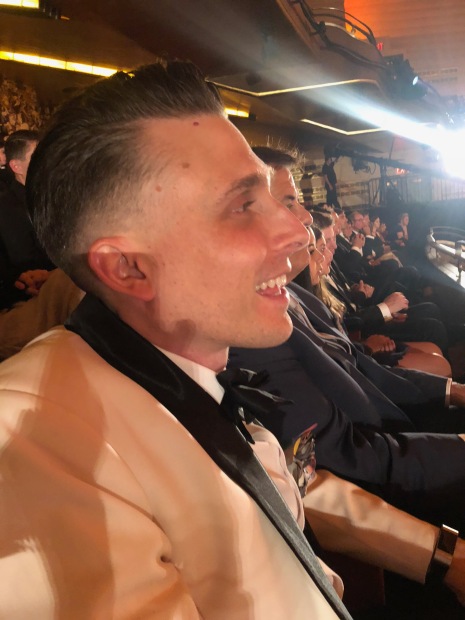 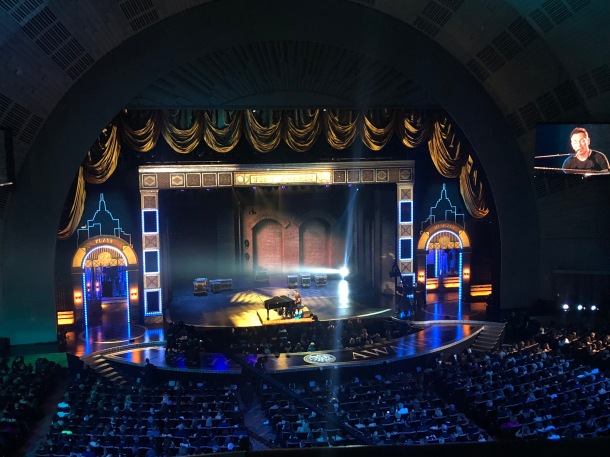 2 comments on “In The Room Where It Happened: The Tony Awards”