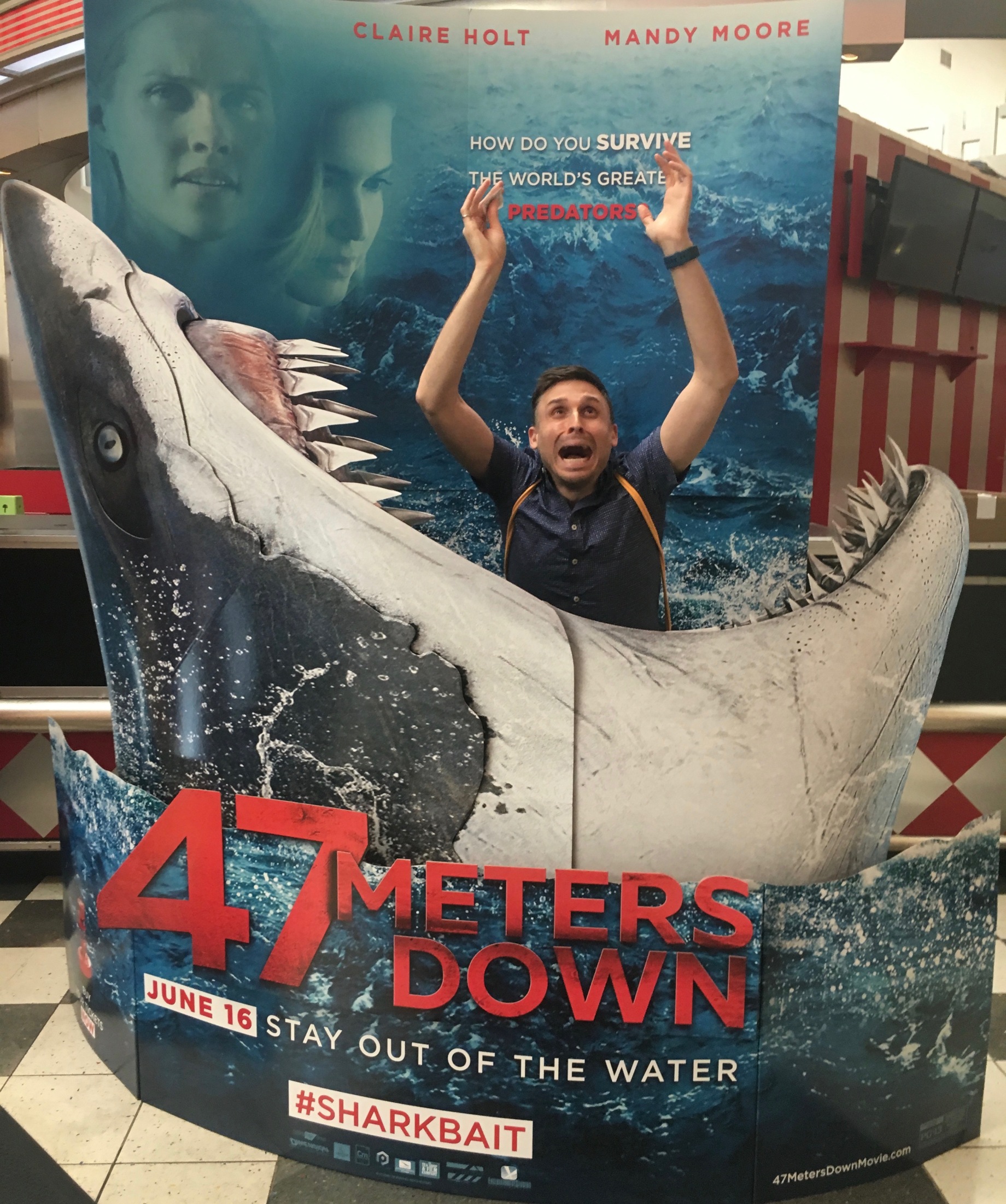 Feb 25, 2018, Editor’s Note: So it turns out 7 of my top 17 ended up with an Oscar nod or two.  In response, I will amend my post title to “The Best Movies of 2017 That May or May Not Get Nominated”.   Also, I have now seen all of the best picture nominees, and the Emoji Movie.  My list remains the same.  I have made a few additions (as are noted) throughout, including my top of 2018 so far.

From the first (and best) Land Before Time, Mike’s happy place has always been the movie theatre.  He just loves movies.  He is the owner of over 1100 movies ( including 250 VHS), most that he will never watch again.  Movies to Mike, are meant to be seen on the big screen.  In 2017 alone, he only missed seeing 18 of the Top 100 Domestic Grossing Films in the theatre (sorry Emoji Movie!) (get a life Mike! Seriously!).   Mike even started his own Film Festival in Philly 2 years ago where he is the sole organizer, promoter, and attendee.  Today we have Mike W Plumton, famed Film Lover and Self Proclaimed Critic, here to share his favorite movies from 2017, none or few of which will gain any awards this season.  From all of us at Lost and Found, welcome Mike the Film Critic!

Thank you Lost and Found for having me.

The Oscars tend to lean towards period pieces, war films, political stories, and lately, straight actors playing gay.  I can appreciate a lot of these movies, but often I feel that my movies are rarely represented.  What I look for in a movie is flawed characters that I can cheer for, filmmakers who take an effective risk, a great finale scene, and something to talk about after the credits roll.   I love seeing stories that I can relate to, someone who inspires me (Zac, looking at you!), and a lesson to be learned.   Lastly, I look to be entertained and engaged.

The next 12 movies are the movies that moved me, reminded me, taught me, and got me. Do note that I have not yet seen The Post, The Darkest Hour, or My Little Pony The Movie, so therefore, they were not considered for this year’s list.

Alright.  Previews are done.  Cell phones are off.  It’s time for our featured presentation!

The following are my Top 12 Movies of 2017, listed in Release Date Order.

The LEGO Batman Movie: The animation is vibrant.  The humor is so clever.  And the movie… has BATMAN!  Being the first spinoff in the Lego universe, I was unsure of where this would go.  Deciding to build the movie mostly off mocking the characters and all previous Batman iterations, while running at the explosive pace of the Lego movie was a brave risk to play, and it totally paid off.  Add in millions of Batman and non-Batman villains, along with some solid 80s call backs, this movie felt fresh in the crowded animation world.  Ka-pow!

Logan: Being the concluding movie in a somewhat failing trilogy, Logan took a full claws out 180 degree turn to become one of the year’s best.   There was no tired paint-by-numbers Disney Marvel style here.  Logan took risks with characters we love, actors we know, and it really really worked.  It was powerful, emotional, real, and raw.   Oh, and it’s a western.  And it’s still a superhero movie.  Stick it Marvel!

Power Rangers: Okay, so this one is here more for sentimental reasons than overall quality.   Power Rangers was my show as a kid.  I desperately wanted to be (or date) the Red Ranger.   Seeing this on the screen again just made me so happy.  This new version morphed a solid balance of call outs to the original, with just enough modern teen angst and backstory to make it a fun Saturday morning kind of movie.  Krispie Kreme donut anyone?!  Ay yi yi! 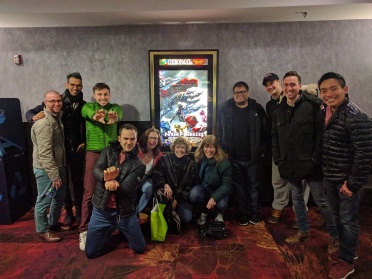 Wonder Woman: Where Logan went rogue (aka- western), Wonder Woman showed that a super hero origin story can still be fresh.  Visuals, inspired characters, plot balanced with action; everything worked.  It also stands as a stand alone film, and as a lead in to a greater universe.  The villain was still kind of so-so, but that didn’t really matter because  Wonder Woman was just so wonderful: Seeing a woman front and centre (finally!), blowing things up, while still maintaining her authentic charming positive outlook… sigh!  Now that is a hero I can get behind, and who can inspire us all. 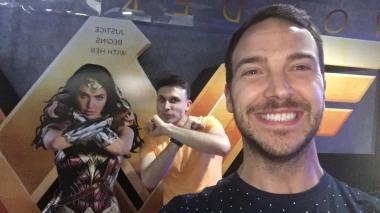 Dunkirk: I’m not a fan of war movies.   But I love Chris Nolan, so I went.  It’s a powerful tight movie.  It’s great seeing the old Nolan cast back together (including a secret Michael Caine role!), but the real start is the soundtrack.  I swear it’s a heartbeat/ticking time bomb that’s been amplified.  I went to see this one at 10am by myself, and by the time it was over, I think my heart rate had burned my day’s worth of calories.  It’s intense. I was moved, distressed, and inspired.  Land, sea, and air- I surrender!  White flag! This is an excellent war film.

War For the Planet of the Apes: I’m not a fan of war movies… 😉  But I love apes!  Really though, I’ve appreciated the new take on this series, and I was hopeful for a big blow out for a trilogy finale.  But that’s not what I got.  Yes, there’s some impressive action shots and effects, but this finale took the risk of slowing things down, and played with our hearts.   This is much more of a coming of age character wandering piece.  There’s so much gorgeous scenery, and bleak endless wandering.  It’s a beautiful picture that I never knew I wanted from a Planet of the Apes movie.

Happy Death Day:  Happy Death Day is the best kind of surprise gift you can get!  It’s a huge shout out to the Screams and I Know What You Did Last Summers of my teens.  It’s clever and self aware, which allows us to scream and laugh right along with the cast.  Yet somehow, it didn’t seem cheesy or predictable, which are the greatest killers of most horror movies these days.   Get Out and watch this: It really is a fun time, if you’re okay watching someone get killed again and again.

mother!:  The imagery and messaging in this movie are exceptional.  Even now when I think about it my head just explodes.   I still refuse to share any spoilers here, but those spoilers are what make this movie so very good.  Yes, I have a soft spot for J Law, and I too found it a bit slow, but despite what the box office says, trust that when all of the pieces come together, it’s worth every moment.  And if it doesn’t connect for you, call me.   We need to talk.

Coco:  A truly beautiful movie in every way.  Emotionally.  Musically.  Visually.  Culturally.  Oh, Coco.  Mi corazón!  Pixar is the animation studio that sets the bar, and doesn’t rely on cheap jokes, and safe storylines.   This is especially showcased in their original works like this.   There is a realness to the characters that just makes them so relatable, no matter what their age, colour, or experience is.  Coco’s familia is Mi Familia.  Even with all of their quirks and their secrets, there is a harmony if we just listen for it.

Call Me By Your Name:   I went in with buzzy expectations.  Yet, it’s a bit slow, and I kind of missed the appeal to Armie Hammer’s character.  It was after the film ended that I fell in love with it.  We talked about it, and what it meant to each of us.  I didn’t consciously realize it, but the greatness is in how the film is shot.  Like the characters exploring themselves and their feelings in random northern Italy, the audience is taken on that secret love affair through the visuals: the unexplored country side, the gorgeous buildings, strolling under the warm sun, and well, the peaches…. 😉.   It’s beautiful like a lazy sunny day: A day that we don’t realize is so special until the sun sets, and the credits roll.

I, Tonya:  Alison Janey, alongside Margot Robbie, bring a depth, complication, humor, and somehow relatedness to two very divisive people.  Bringing an audience on to their side is a more difficult feat than a triple axel, yet they do it with such unapologetic honesty that at the end I was cheering for them both.  This docu-style movie is solid, quick, and really funny.  It deserves to be at the podium.  And the acting- that is gold medal. Particularly Janey.  So if she doesn’t win… watch out Nancy…

The Greatest Showman:  It’s a big showy beautiful circus of a movie that is meant to be seen on the big screen.  It’s a broadway-like musical, mixed with circus style visuals, held together with some beautiful messages around inclusion and acceptance, topped with Zac Efron and Michelle Williams.  What could be better?! The entire cast seems to be loving every beat of the show as well.  Every song is a beautifully written anthem, and each one is choreographed so well.  I didn’t know the music, but my heart sang along.  Yes, there is some (inaccurate) history presented, but I can google this.  This is such a great feel good movie.  There is something special in a story that moves you.   This Is my very favorite of 2017. 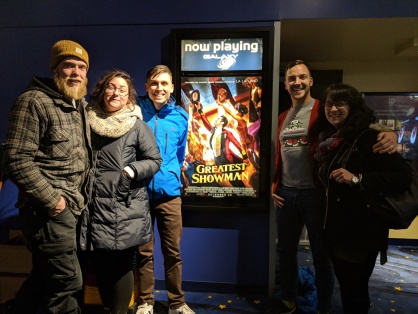 Rounding Out My Top 17 of 2017: A Bad Mom’s Christmas, It, Molly’s Game, The Disaster Artist, and Titanic (It got a 20th Anniversary rerelease! :)).  Editor’s Note: The Post was also print worthy fantastic.

Bonus Feature: 2017’s Worst Films: Boss Baby (I’d rather watch an actual baby melt down), Despicable Me 3 (despicably lazy sequel), and The Florida Project (Who wants to watch the worst behaved kid run around for 90 minutes?!…

Sneak Peak Into 2018:  22 days in, and 3 movies watched, the 2018 Best Picture goes to…      Paddington 2!  Paddington is adorable, and a great distraction from the cold world of today.  It’s got incredible heart, witty British humor, effective effects, and a tight cast.  You’ll leave feeling better about the world, and yourself.  Maybe you’ll even have yourself a post movie marmalade sandwich.  Go see it.

Editor’s Note: Winchester, Black Panther, Annihilation have also been stand out movies so far in 2018.  Please do yourself and miss the train, and never bring yourself to the cinematic tragedy that is 15:17 to Paris.

So there you have it!   Any of your favorites above?  If not, let us know in the comments below!   And if you’re not happy with the nominations this year (#OscarsSoBland), I encourage you to spend Oscar night with one of the year’s actual best films (see above).

Song of the Day: This Is Me (The Golden Golden Winning Song of 2017)