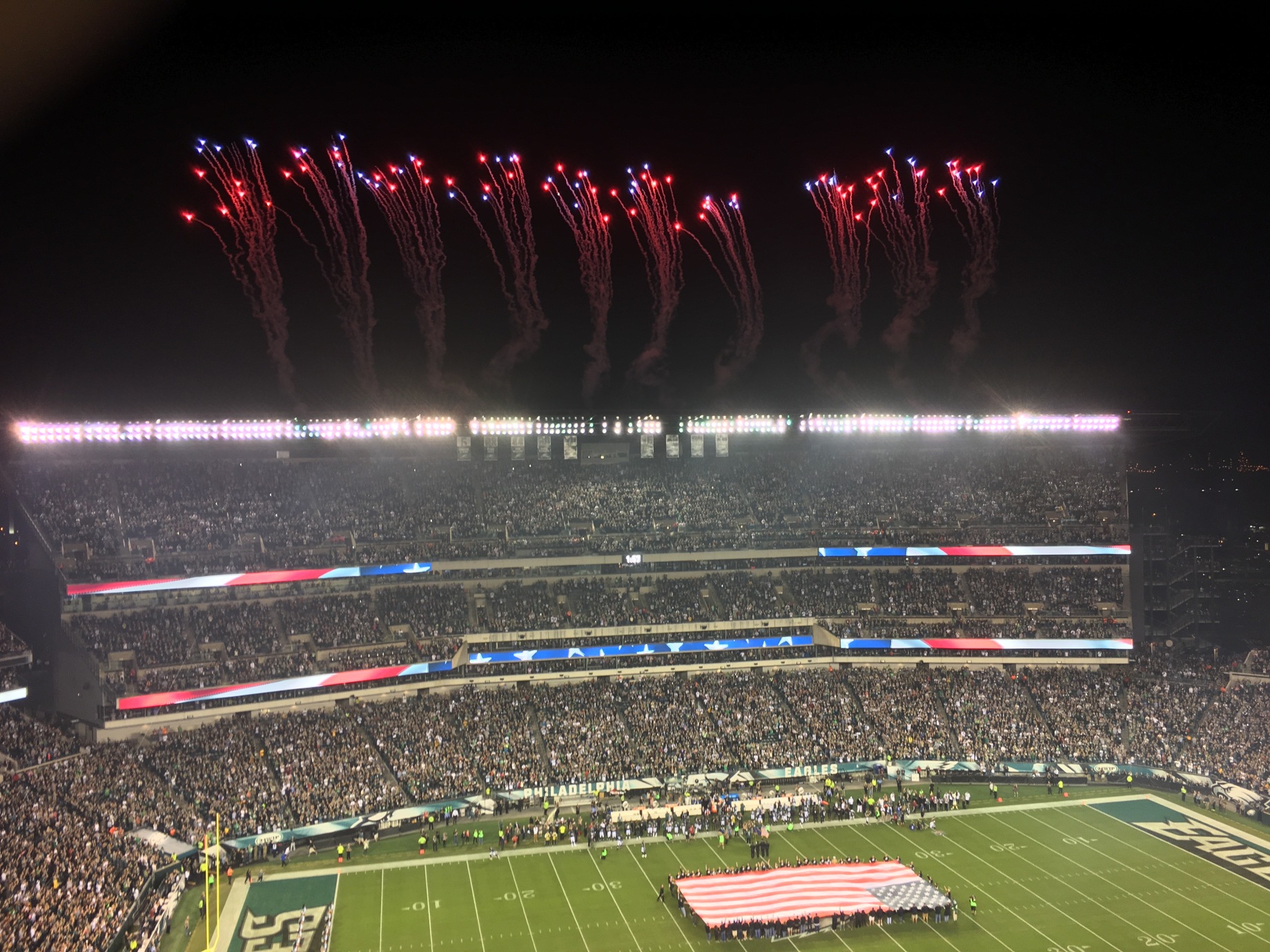 This is my life’s motto: If it’s legal, safe, doesn’t hurt anyone, and I’m available, I’m game.   I’ve found some of my favorite adventures in life by simply leaning in and saying yes.  After moving to Philly 21 months ago, this really has become a way of life for us.  So when an offer came to check out an Eagles game with our friend Nick from back home, we said sure, why not?!   We were going to our first real life Monday Night Football game.

Then it dawned on me: I have never watched a football game, live or on TV.   It’s even just now clicking that football is a big Sunday night thing not a Monday thing.  The only thing I know about football is the uniforms <3.  I can’t name a player, or call a foul.  Sporting events are like art museums to me: I really think I want to go, I love the first hour, then I get overwhelmed and I want to leave, but don’t want to miss anything so I drag myself through.  I am intrigued enough to see what this NFL thing is all about, and happy for Nick that we weren’t sending him alone.   As I tug on a green shirt, I look in the mirror and recognize the privilege I am being given.  Seeing a football game: This is the American Dream.

When that Monday night rolled around, I’m all game for it.  We step out of the subway station, and the stream of green is undeniable.  It’s already an experience.  The community chatting, the little cute BBQs (THAT’S tailgating?!).  I feel like there is so much going on around me, I could just lift up my arms and be carried away.   As we swim with the crowd, the Wells Fargo Stadium beams like a castle.  The glow of lights.  The moat of the people going through security.  This is not the slightly angry yet charming 76ers game we went to a year back: this is alive.  The undeniable contagious overflowing excitement excites me too.   I’m a big fan of energy, but this just doesn’t stop— all night. 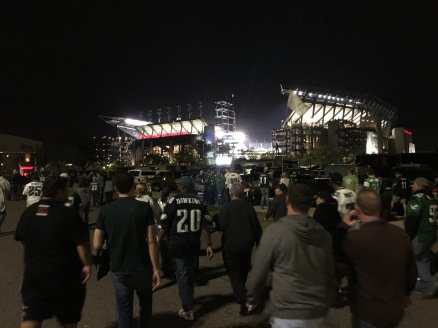 The next 3 hours are filled with what I can only describe as football culture shock.   I normally can fit into strange (to me) situations like sporting events, but tonight is a whole new experience. 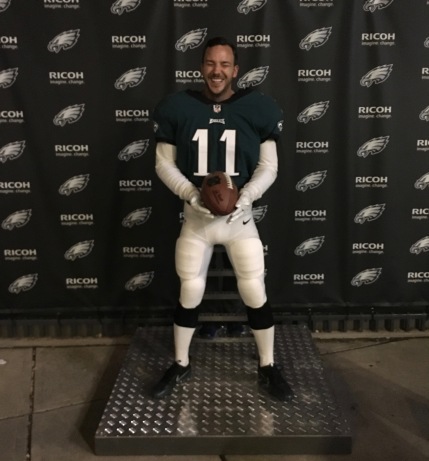 The excitement and energy brings feelings of wanting to fit in.  I’m used to sporting events where we watch the game some, chat some, eat some, and chime back in for the exciting bits.  It turns out for an NFL game, all of it is exciting bits.   People are standing and sitting and cheering, and standing and sitting and cheering nonstop.   I become afraid to make eye contact with the guy next to me.  He is very into the game, and an unknown level of drunkenness.   Anytime the Eagles do anything at all, he erupts into shouts and screams, looking for high fives all around him.   I think I can play along, but I can’t fake it.  It’s like he, along with the rest of the crowd, are watching a different game than me.   Derrick catches on fast, and he’s loving it.  I’m feeling tackled and confused:  Why are we standing again?  Why is that man cursing the referee from the 500 section?   Why is it taking 57 minutes in real time to get through 13 minutes 27 seconds of game time?   The yelling and screaming.  The chants.  The beer spills, the booing of the other team (go Washington!).   It’s a language I can’t seem to understand.   It’s nonstop grunting and man-hugs surrounding me.  And the halftime show isn’t Lady Gaga OR Beyonce…

The guy next to me, even in his drunken stupor, soon gives up on me, the dead fish guy on his right.  Nick leans over, asking “how it going?”  Glistening more than my beaded water bottle, I look back:  “Yeah!  … I like it”.  I want to fit in, yet I’m afraid to ask for help.  I am asking too many questions in my head. I am down on myself, and down the game, which isn’t scoring points with anyone.

As overwhelming as this experience is, I know when it’s over, I will regret it if I wish it away.  So I decide it is time to step into overtime, and stop asking myself questions.  Lean in.  Let go.  Stop watching the clock.  If people stand up, stand up, and turn around for a moist high five from the dude behind us.  Embrace the group.   Find joy spelling out E-A-G-L-E-S Eagles time and time again.  Clearly, this is a big release for some people and I can accept that.  When I stop worrying about the rules, and chose to fit in, I find my footing for football.   It’s mildly entertaining after all.  So when Nick says it’s time to go (3 hours plus into a 1 hour game, not that I was clock-watching), I am actually a little disappointed to leave.   The Eagles win by a touchdown or two (34-27 I believe), so all are happy, except for those 3 brave Washington fans.  The stream of green funnels out, and the world balances again.

I’m glad I put my game face on that night, and said yes to this.   I appreciate the experience, even though it wasn’t my favorite, and it’s doubtful I’ll go back (sorry fans!).   Sometimes it’s okay to just fly with the flock, and to cheer with the crowd.  And even if it’s shocking, it’s usually worth finding the charm in something wild, loud, and sweaty, like America’s dear old football game.

Song of the Day: Fly Eagles Fly (Everybody now!)

2 comments on “The Unexpected Culture Shock of an NFL Game”