Hillary.  Obama.  Michelle.  Chelsea.  Bill.  Jon. Bon. Jovi.  Bruce.  Derrick and I were so lucky to go to Hillary’s first rally in PA following her nomination at the DNC, and tonight, I’ve rsvp’ed to attend her final rally.  The rally is at Independence Mall- exactly where the Declaration of Independence, and the Constitution were created!   What a perfect backdrop for a historic moment.

At 3pm, I take out Prim for a walk, and I notice the line already… running about 10 blocks from where the rally is taking place.  I definitely underestimated the crowd, and my rsvp means nothing.  So I zip home, I dig out my winter jacket, throw on a hoodie, and rush out the door.  I power walk down the street, and search for the back of the line.  Along the way, I realize that I forgot my Hillary button.   And then it dawns on me- I forgot to put my jacket on.  But there’s no turning back.

By 5:30pm, we’ve moved a block and a half.   The stream of people joining the lines is enormous.  My phone has died, I’m a little chilly, and I have to go to the bathroom, but I’m still hopeful. 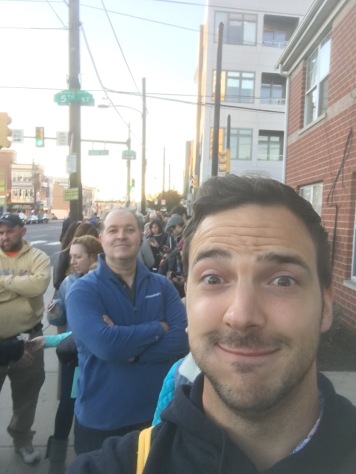 6:45pm.  It’s dark now.  We’re moving about 10 feet every 5 minutes.   Someone has brought Timbit-like morsels from Dunkin Donuts for the line.   I think they may be for the kids, but I politely take one anyway (desperate times!).  I’m listening to the crowds around me.  Behind me, there’s a family made up of 4 children, a mom, an aunt, and a grandma who brought 100 Hillary stickers to hand out.  The excitement and optimism in her voice about the election is grounding.   There’s no trashing, no blame, just optimism for what’s to come.

7:33pm.  We hear from crowds that Bon Jovi started promptly, and ten minutes later, we’re informed that the event is at capacity (40,000 people!!!).  We weren’t even close: see below.  My initial reaction is let down, and disappointed that I spent 3.5 hours in the cold.  As the line peacefully dissipates, the grandma from behind me says “wasn’t that exciting, to be part of something like this.”  She’s right. Even though I didn’t make it inside, we were a part of it.  She’s hopeful. 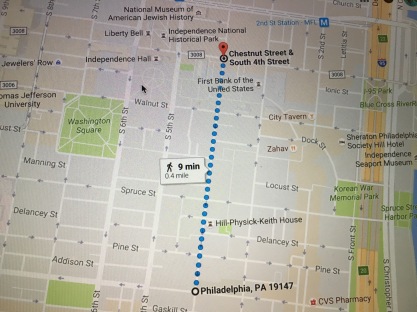 This election has been loud, and angry: Not just the candidates, but the people.  How hate was given a platform without consequence.   It’s been an odd experience living in a country where at times I’ve felt helpless because I can’t vote; I’ve felt concern because I am impacted by the outcome; and I’ve felt threatened because my basic human rights are up for discussion.  Standing in line tonight was a calm at the end of the storm.  It reminded me that if we stand together, we can work together.

We end up watching the rally on TV at Stella’s over pizza with a few strangers.   Seeing the first family, hearing Hillary’s vision for America, and seeing the shared passion for this country, I feel connected to that huge crowd at Independence Mall.   As this historic rally finishes, I close my eyes. Despite the fear that I’ve felt, I now feel only hope.  It’s done: the election is finally here.

Story of the Day: The Story of Us (it’s a beautiful video- have tissues handy!)