Today would have been Al’s 65th birthday.    A few days ago, I was gearing up to sing one of our slightly on key yet always charming birthday renditions to him, and now… now I don’t even know what to do.

My step dad Al had brain cancer.  And he died five days ago.   When he was diagnosed, and even now, I’m struggling to share the news.  Derrick is asking when we can post about it on Facebook, and my response has been “not yet”.   I’m not denying that he had brain cancer, or that brain cancer killed him.    It’s that I don’t know what to do.

Shortly after we found out he had a brain tumor, I decided I would write Al a letter.  I wanted to  say all of those things I’ve never said, but always wanted to.  To realize those things that I didn’t even notice before.  Things I’ve learned from him, things I appreciate, favorite memories.   We were not always on the same page, and I wanted to say that I’m sorry for that.  I wanted to get to know him better.  I had trouble writing anything.  So today I thought I’d try. 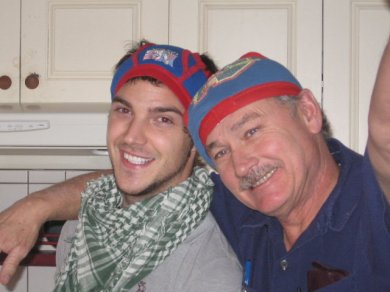 Al came into my life 26 years ago.   It’s hard as a kid going through a divorce to find any sense of balance and connection.   Especially with the new guy.  He seemed pretty great, but it’s confusing seeing my dad on the weekends, and now this Al character was in our lives mostly every day.

I remember having a headache when I was about nine, and feeling my head was going to explode.  Al got to me to calm down, to massage my temples, and to just breathe.  I didn’t know it then, but he introduced me to the idea of mindfulness.

My brother Brad and I share a birthday within a few days.  I think I was turning 11 or 12, and Al created a scavenger hunt all over Peterborough.   Clues took us from a playing field, to the hospital, to the Lift Locks, and back again, all for a soccer ball.  It was pretty awesome.   It was a great day when the kids, and the adults, play.

Al taught me to do the dishes every night after dinner, even when others didn’t.   I was frustrated back then- I had important things like playing Super Mario World to do.  It was hard to see the responsibility it was building in me. Dishes were key to getting in the good books with my in-laws.   So thank you for that. Al loved trees, and being outside.  Cutting the grass was never a chore.    He loved building things, he had so many tools.  He loved family, and going east.  Relieving his childhood, connecting with old friends.   Walking the ocean.  He loved dark chocolate toblorones, nasty turkey necks and livers and all of those pieces of the animals no one else does.   Sardines.  Boiled dinners.  Wine.  He made the best burnt pancakes.  A warm sweater, and socks with sandals.  Oh, your socks with sandals.   It takes a lot of courage to wear socks with sandals- I admire that.

I remember when mom, Al, and my sister came to Toronto see a comedy show called Women Fully Clothed.   The humor was very “women centred” (period, menopause, relationship stuff).  I thought it was hilarious.  Al didn’t really get it.   Afterwards, feeling that we did something that could be viewed as hyper feminine, we thought we’d do a hyper masculine thing: We took Al to Hooter’s for the first time.   When we walked in the door, we sat down, and he looked around.  “This is it?”  Haha!  Ah… even then I didn’t know what to say.   Oh, the random stories that come back. 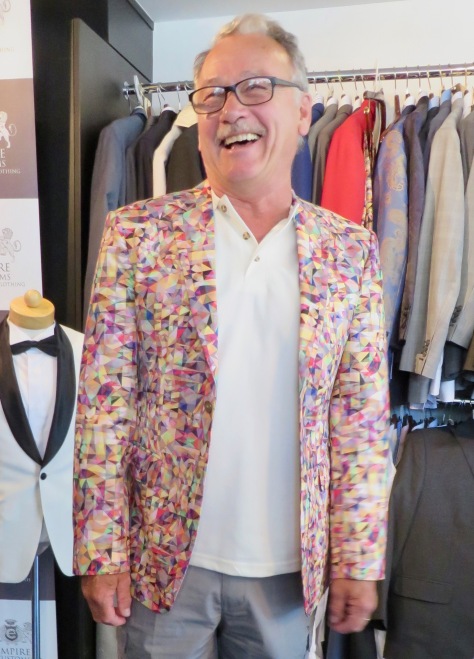 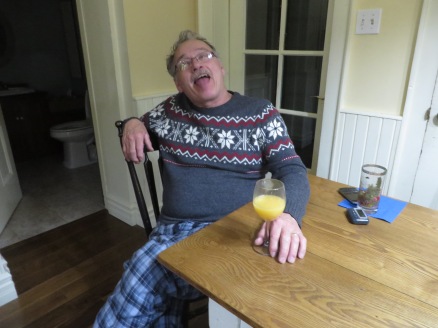 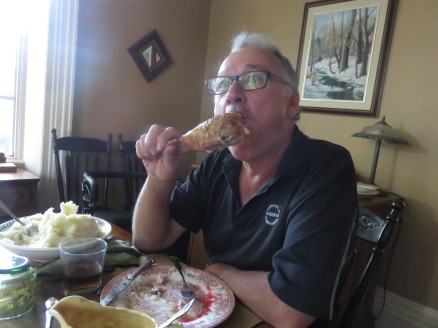 Fast track to the last 135 days.  The Al Has a Tumor Phone Call, August 1, 2017.  My mom called on that Tuesday evening.  I was mid supper bite when she said something bad had happened.  I blanked out most of our 6 minute conversation, remembering only that Al, my step father, had a brain tumor.   That call started some of the loneliest, some of the quietest, and some of the hardest days I’ve had in my life.

Being away from home has been a privilege, and a curse.   I can hang up the phone.  I can walk away.  Yet I miss some of the moments that count, and some that don’t, and a few that we think don’t count, but they do.  I am feeling more lost than found these days here in Philadelphia.  It’s hard to pick up the phone and tell someone that your step dad is dying.   It’s odd sending a text message about it.   It’s a conversation stopper over a dinner party, when even I don’t know what to say.  It’s impossible to think of anything to say, or ask for, when someone says “if there’s anything I can do, let me know”.  So I just didn’t say too much.  Thankfully I had a close group of friends in Philly, Derrick, and almost daily calls with the family back home.

At this point we knew that Al had a brain tumor, but it was unclear what it was.  He would be having a surgery to find out, and ideally remove it.  For two weeks, the world paused, as we waited for any sort of answer.  On the day of the surgery, it was cancelled, and postponed two weeks.  Then the following day, my Grandma Fife died.   (Breathe)

When the surgery happened two weeks later, they were able to remove 70% of the tumor.  I think we were all envisioning a huge hole in his head after the surgery, but it appeared only as a slight cut.  Al thought he bounced back from the surgery, and after one night in hospital, he returned home… to cut the grass.

It turns out he tried to be ‘normal’ again much too fast, and over the next month, he was in and out of the hospital.   The tumor was found to be glioblastoma, a rapid moving unstoppable killer of a cancer.   The stats are incredibly grim, but there was hope that we could still get time.   Months, weeks, days, hours, minutes, we will take them.  Glimmers of hope, suggestions of treatments, the reality that he would die at some point soon, and a lot of waiting became our world.   My mom… I have always been her number one fan, but seeing her deliver this patience, this care, this love, while having no idea what she was doing, but doing it anyways… She’s pretty incredible and I’m grateful that Al had her by his side.

As the days passed, the conversations turned from “hopefully something will work”, to “maybe we try that”, to “he’s dying, and at this point there’s nothing we can do”.

Thankfully, Derrick and I were able to travel home for both Thanksgivings (Canadian, and American).   In October, I baked him a lemon pie.  Although he couldn’t move his legs, or talk much, he did manage to make a face about how sour it was.   Oops.  I’m grateful we had that moment.   In November, he was now at home.   Officially, no treatments will be pursued.   The tumor was pushing on his brain, but he was here.  He couldn’t sit up, he couldn’t move, he could barely talk.  But I could see him in his eyes.   His body wasn’t responding, but his mind was there.    I struggled to treat the situation as normal, and I wish I had said more than I did.  Somehow, when I hugged him so long, I thought I would see him again.

Saturday morning, we wake up to ringing: It’s the landline.  Before I look at the phone, I know it’s my mom.   And before I answer it, I look at Derrick, knowing what she is going to say.  I try to listen, like I have for the last four months, to be the sounding board and the positive one.   My voice traps in my throat, and when I can only squeak, I toss the phone to Derrick.  Three months of waiting, of hoping, of giving up, of processing the unprocessable poured out of me.   Derrick and I call it the banshee cry.   You know, the loud wailing uncontrollable cry.  All of that holding together just broke apart in the middle of my bathroom floor.   My heart and my mind just hurt so much.    He’s 64… How?…  But… And my mom… my poor mom.   Saturday, December 9, he was gone.

Later that day, I decide to go to yoga.  Clear my head.   Moments before class begins, insert another banshee cry, only this time in front of a group of strangers.  Yet, it’s pretty incredible how strangers can become your closest friends in moments like these.   Sunday was the business day: when can we go home, when is the funeral, what needs to be done.   Monday was the fuzzy day.  I shifted task to task, I’d walk blocks without paying attention.  I ate peanut butter and a banana for dinner.   And my body ached.   Yesterday another blank out day.   Today, I am simply here.  And on Saturday, we go home. (Breathe) 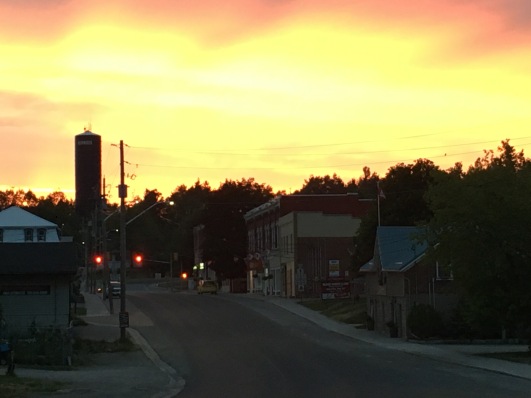 Losing a parent is the most surreal thing.   It’s grounding, it’s horrifying, it’s awful, it’s painful, and it’s a release.  I’ve been so angry, and devastated, and resentful, and feelings I don’t even have words for.  It’s aging.  We are so temporary.  And yet the world keeps turning.  It’s a reminder to lean into the awkward, to not complain until it’s too late, and to find the peace with everyone around you.   135 days is nothing.  If Al is leaving us with a final lesson, it’s find your joy now.  And if you want to, wear your socks with your sandals.

Recommended Reading if you’re dealing with a death, or looking at how to more effectively support someone: Option B

Song of the Day: Remember Me (Coco)